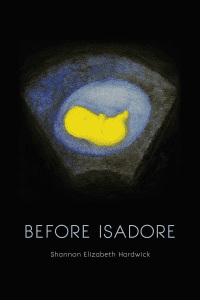 Before Isadore by Shannon Elizabeth Hardwick


On the cover of Before Isadore, there is a luminous fetus. It is a yellow jelly bean with nubs, floating in its womb sack, and we are glimpsing its early gestation as if through the window of a first sonogram. The stunning cover art by Daniel Maidmen is the perfect introduction to Shannon Elizabeth Hardwick’s first full-length, itself an intimate portrait of a surprise conception, a splintering relationship, the decision to terminate, and all the emotional and psychological fallout of the abortion.

The eponymous first poem is compressed, dramatically spare—only a few lines to deliver the news of pregnancy:

a great wind and in
its mouth a great pain

expanding into a pink
line pressed. (9)

The “pink line” of the pregnancy test is not met with joy, but rather “a great pain / expanding,” which readers soon discover in the loosely woven narrative arc of poems that follow.

The speaker’s principal concern about carrying to term orbits around her highly unstable relationship. The instability is imparted in geologic terms: beneath the bedrock, magma. We learn that the speaker is married to Michael, a man dragging his own ghosts and rage into his present relationship: “The man beside me sleeps but when he’s awake /
he sends bombs into the earth to feed his son” (12). The speaker continues, “I am radiating / / the thickness of some girl’s legs, his divorce / that already happened is happening in me” (12). The speaker’s marriage teeters, and it is in this environment she must choose. To keep or not to keep.

Later in the collection, we get a sense of Michael’s real violence, what the speaker has endured at his hands:

What appears to be a large motivational factor in ending the pregnancy is protecting the unborn from this violence, from her father’s hands.

The emotional complexity of the decision is captured in poem after haunting poem:

. . . who kneels
Their body before destruction for fun who
Takes the child out with the bathwater except
The mother held herself despite being

Isadore, the aborted fetus, alternately haunts the collection as principal ghost and consecrates it as presiding angel. Poems are written to the unborn child, whose name shares its etymology with Isis, “mother of the dead” (11). In “Were I to Prepare for Your Death,” the speaker contemplates how she might ready herself:

were it winter in every inch
of the body, were it raised up
mountain green and star-ward,

were the horse unbridled
in her stall—storyteller;

I go into that cave, blind,
and like Michael, devoted.

In another of several poems addressing Isadore, the title plays on the unborn’s name: “Isadore—There Is a Door Somewhere.” After the abortion and its subsequent nightmares of severed heads and red-robed monks and tantalus feasts, the speaker dreams of and imagines the threshold she might cross to connect with her daughter.

Child, I want to fly as quick as I can
into a canyon, leap hard into your
eyelids—how they never formed
enough to open—I will wait, still.

In this dream, we circle you
in prayer and open any body willing
to be demolished in your name. (18)

Hardwick’s collection is divided into three sections. The first and last sections contain the narrative arc of the relationship, the abortion, the second child that the speaker does carry to term, and the eventual complete dissolution of the relationship with Michael. The middle section, however, is like the womb of the text itself in which a human gestates, each poem zooming in on a limb or organ. Titles in the womb-section include “How Eyes are Made,” “How Feet are Made,” “How Lungs are Made,” etc. However, there are several surprises: “How Grief is Made,” “How a Home is Made,” and “How a Woman is Made,” to name a few. Strategically placed, the section ends with “How an Abortion is Made” and “How a Marriage is Made.” The fetus that has metaphorically grown by accumulation throughout the section dissolves, finally, in the end. And readers see a foreshadowing of the marriage’s dissolution: “She wears, weaved, / herself a dress to greet them— how / they eat together but pray alone” (44).

And what is a prayer? Only the innermost yearning conveyed to the light. Only what ultimate grief sometimes spools from us, as Hardwick reminds us in her final poem, “The One Who Broke”:

Sometimes a prayer can be about re-entering
the haunting. Sometimes it needs your voice
to speak into. A prayer can be about touching
the untouched again, to walk in the room,
bow down in honor of the lighted heart
on fire for your destruction, the one who
broke into you and made a person who prays. (65)

I don’t want to make the mistake of presuming that the speaker and poet are one and the same in this collection. Having said that, I find Hardwick to be a remarkably brave poet for honestly portraying human relationships in all their mess, the weighty decisions we face as a consequence, and how we forge onward, broken, broke into, haunted and prayerful.