The roommate in the skit was a sock full of marbles. My roommate was a throbbing model of the city we lived in at the time, which was neither famous nor consistently referenced in statistics. Both of these things have changed. Our breakout session focused on frequently asked questions. Nobody particularly liked this symposium, except for making out in alleys afterwards and drinking impermeable clear liquors in joints where for liability reasons they made you down a shot of buttermilk before walking through the door. And now, over a decade later, those same joints are being firebombed by kindergartners and the breakout sessions are on explosives in the classroom. I told my roommate about the time I arrived extra early to class so I could shave my legs, and found shell casings in the corner of the classroom, and at the time that was unusual. My roommate only cared about what kind of razor. The apartment in the skit contained typical artifacts of a mop closet. The hose made me super uncomfortable, but maybe it was razor burn. This was before my roommate and I declared all our ointments to be open access. During the announcements, the announcer noted that a major motion picture would soon be filmed on campus. My roommate munched loudly on a few slices of frosted banana bread. I viewed that film seventy times, hoping for a glimpse of my bare legs under a tablet desk. There’s nothing more sacred than a roommate, one of the actors in the skit declared, but this was clearly an ad lib, since we attended a public university where you couldn’t say anything was sacred. 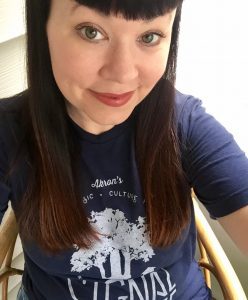 Mary Biddinger is the author of five full-length poetry collections, including Small Enterprise and The Czar. Her poems have recently appeared in Diode, Five Points, Gold Wake Live, Grimoire, and The Laurel Review, among others. She lives in Akron, Ohio, where she teaches at the University of Akron & NEOMFA program and edits the Akron Series in Poetry. Biddinger’s first collection of prose poems, Partial Genius, is forthcoming from Black Lawrence Press in 2019.