Evening, slick-tongued, ties up the night like a cherry stem, promise

of rain shuddering a few aimless stars. The moon gilds into a relic

of older nights, opulent with throne and spice, gutter-scents enslaved

from new mouths. These are the alleys where men pay for touch.

Too measured to call it pleasure, that methodical stoking of skin

into its own cold smolder. A bill slides across a lacquered table

expat king. In another city I once took a job as a bar masseuse,

so I too have taken payment for my hands, stroked CEO’s

and brokers into those most intimate sounds a body makes

when the mind tunes out. I’ve been that girl lighting the night

with the lamp of her throat, a glow that says

that there’s a cost? Both a little lost, Gypsy and I traipsed

of London’s workhard/playhard crowd in the popsicle glow

of glass-blown cocktails. We were taught the language of refusal

comes more naturally than yes, so we pressed our hips a bit

against their backs when we promised to relieve their stress.

I remember the night Gypsy puked all over an Italian suit,

confessed she was pregnant and wouldn’t keep it. Trellis-frail,

her dress seemed afraid to touch her skin. She curled into a booth

to rest and I kept massaging necks. I always got the biggest tips

like loneliness. Beyond Dong Khoi, far below the storied rooftop

bars of the Carravelle, the Continental, from every doorway

someone casts a line old as trade. Don’t we all call out constantly

from the porch of ourselves? I’ve crammed in a subway car,

breasts silently filling with milk. I’ve held a man I had no plans

to love, a single egg hovering inside me, calling in the only way it can,

animal musk snared in my hair, blood blushed close as possible to where

I ended and he began. Waiting. Exposed. The night Gypsy didn’t show

I worked alone, pretending I was glad I didn’t have to compete for tips.

It was only later, when our boss called to say she’d hung herself

from a tree in Hampstead Heath, that I remembered finding her in the alley

outside the bar. She was smashing french-fries into a smear of ketchup

like snuffing out cigarette after cigarette. There was something dead

about her then, but I was screaming too loudly to hear her. 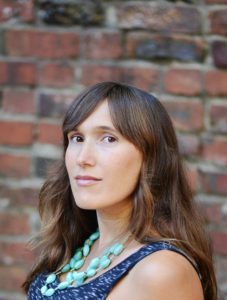 Erin Rodoni is the author of Body, in Good Light (Sixteen Rivers Press, 2017) and A Landscape for Loss, which won the 2016 Stevens Manuscript Prize sponsored by the National Federation of State Poetry Societies and is forthcoming later this year. Her work has appeared in Colorado Review, Cimarron Review, Drunken Boat, Ninth Letter, Spoon River Poetry Review, Tupelo Quarterly, and The Adroit Journal, among others. Her poems have also been included in the Best New Poets anthology, featured on Verse Daily, nominated for a Pushcart Prize, and honored with an Intro Journals Award from the Association of Writers and Writing programs. She currently lives in the San Francisco Bay Area with her husband and two young daughters.