The forest here is made of girls

and automatic weapons. A sparrow calls

across a thicket of brushwood. The antelope gather

come searching for the stolen girls,

the men hide the girls beneath the earth. Should this look

clots of thornbushes too dense for flight. The story

splinters out. Two girls leapt from the lorry

before it reached the forest. They sleep beneath stars

in the forked base of a red bushwillow. A velvet silence

wraps them. At home their brothers split seasoned logs

to reveal the core of sky gray

heartwood good for charcoal and fires. The girls wake

and find a shepherd to carry the hurt girl home

across the handlebars of his bicycle. Inside the forest

the girls are told to choose: be made a bride,

or be a slave. A husband wraps his wife

in cloth and soon they have a son. When she’s rescued

the women at home hate her. They call her war bride,

and worse. No one touches her tiny son’s feet.

She stays covered and at night, in the heat,

a snake comes into the compound

and the boy is killed before he’s even reached a year.

The collared dove has a pale belly, pinkish-white.

The feathers it uses in flight are nearly black.

It’s the wild ancestor of the domestic dove

are girls, their bodies porous 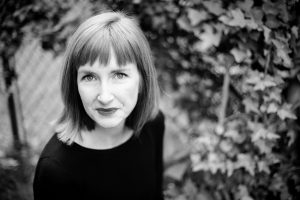 Nancy Reddy is the author of Double Jinx (Milkweed Editions, 2015), a 2014 winner of the National Poetry Series, and the chapbook Acadiana (Black Lawrence Press, 2018). Her poems have appeared or are forthcoming in 32 Poems, Blackbird, The Iowa Review, Smartish Pace, and elsewhere. The recipient of a Walter E. Dakin Fellowship from the Sewanee Writers’ Conference and grants from the New Jersey State Council on the Arts and the Sustainable Arts Foundation, she teaches writing at Stockton University in southern New Jersey.