The first time I saw my husband, he was dancing,

his son cradled to his chest with one hand, the other

cupped, upturned to God. His eyes were closed, lips

as a fig. How could I not fall in love? My favorite fruits

have always been the ones that couldn’t grow here, the sad

potted lemon tree. Look, every houseplant I’ve ever had

is dead, not from neglect, but over-watering. I’m trying

to figure out what language God speaks. It’s a silly question, impossible

as asking how the desert looks to a banana tree. Once I plucked

at God’s vocal cords, & they purred at a frequency right at the edge

of human hearing. The dog was going crazy, licking at my hands.

The hum was gone before I could even close my eyes. In my childhood

church, we knew God was speaking when our tongues shuddered out

I would just stare at the wooden door behind my father, my brain

tugging symbols from its meaningless wood grain. If I closed one eye,

the swirls & ripples would wrinkle into Jesus’ stern face. When I closed

the other, if my father bellowed at precisely the right pitch, I could see

a goat-headed Satan. One time, at the peak of my father’s crescendo—

he was hopping, hurtling across the altar, descending feverishly

into the unmoved audience—three bats flew out of the vent

& began to halo around his head. I had always imagined it was

some forgotten tongueless god that lived in the church’s cellar

behind the cold metal door. After worship, while my father called

the exterminator, I kneeled in the basement, my ear pressed tight

against the heavy door. If I knocked just right, the other side

would flutter darkly, their whisper of wings almost forming a word. 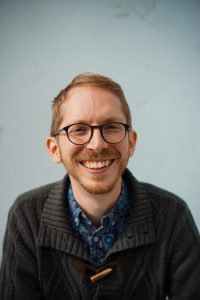 Brandon Thurman is the author of the chapbook Snake Handling (Quarterly West, 2018). His poetry can be found in Nashville Review, Ninth Letter, The Journal, RHINO, The Blueshift Journal, and others. He lives in Fayetteville, Arkansas with his husband and son. You can find him online at brandonthurman.com or on Twitter @bthurman87.