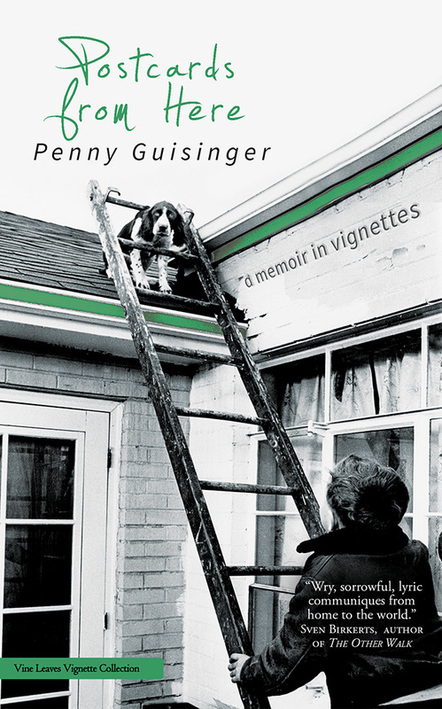 Conventional writing wisdom says that a book’s first sentence needs to grab its reader. Penny Guisinger’s finely crafted memoir in vignettes, Postcards from Here, does better than that. It grabs with the first sentence, and then seduces with the second—about an eggplant, of all things: “Plummy, earthy fruit that tastes like warmth, the floor of the forest, and chocolate.” Though it was late at night when I read this, all I wanted was to walk barefoot through Guisinger’s garden and hold warm vegetables in my hands.
Throughout the pages, Guisinger captures a similar lushness of garden, home, marriage, children, and community. Her portraits of Maine’s people, animals, and landscape nod to some of New England’s finest writers, E.B. White and Maxine Kumin. But each ‘postcard,’ a one-page evocation of a moment, reveals that creating warmth comes with a price: hauling firewood, weeding, aging, staving off the demons of addiction and anxiety, and clashing with the very partner, children, and community that make a life of riches. In short, there is no sentimentality in Postcards from Here. Yes, beauty is wonder: “A cabbage seed is the size of a grasshopper’s foot.” But it is tinged with a price, like autumn: “The hay field, lit up like Van Gogh’s last field of wheat before his suicide, is cornered by birch and tamarack in furious amber.”
As she renders the truth of seasons, so too does Guisinger portray marriage and family. She loves her wife and children with depth and ferocity; yet, as a partner, she tends toward laziness, often watching her wife work while she observes with coffee in hand. Similarly, her parenting, like anyone’s, is filled with missteps and wry realizations:

I have not made [my nine-year-old daughter] a cake in a while, and I usually don’t let her help because it takes longer, and so I don’t understand that weepy feeling [I get] when she says she likes to help me bake—like another thing I’m only appearing to get right. It’s as if the memory of whatever cake we last baked is better than the cake itself.

Guisinger’s domestic life takes place in the moment that same-sex marriage becomes legal, and her gentle approach to this political issue and others, including firearms and global warming, reminds us that the personal is political, especially when it involves the people and places you love:


Four Portland bakeries donated over sixty wedding cakes to feed the seven hundred people who attended the victory banquet. All that data comes down to the heartbreaking way you pick up the pitcher and refill my water glass because you know I am thirsty.

Just as she handles her messy life and messy issues with insight and care, so too does Guisinger craft her book’s structure. Unlike other memoirs-in-vignettes that trace the arc of a life (such as Abigail Thomas’s Safekeeping or Lawrence Sutin’s A Postcard Memoir), Guisinger concentrates on a short and vibrant period, just a few years. She suggests that the here and now is what matters, not what came before: not her childhood, nor her first marriage to her children’s father. Yes, the old pain lingers, but it is visited briefly because the present has enough pain of its own. In her quest to stay present, to stave off paralyzing worry and despair, Guisinger preserves individual moments as she preserves the bounty from her garden: keeping a bit of the recent past in the present so it can sparkle on a shelf, then feed body and soul, and finally be returned to the earth from whence it came.

Another delight is the way Postcards from Here eschews chronology and order. The postcards aren’t interested in a tidy storyline, nor does Guisinger label and organize them into categories like an insect or butterfly collection. Instead, the postcards come to the reader as precious objects assembled in a gorgeous yet unruly box. Here, all at once, we experience the lived chaos of mind, marriage, children, body, and place. It is a truth, a difficult representation to achieve, and Guisinger does so with skill and grace.
Postcards From Here reminds us that a postcard’s purpose is not memory or story, but to send a small piece of oneself as a memento, rather than a definitive record or missive. The book invites readers to appreciate each small piece of paper and then place it with care back into the jumbled box as we move forward into our own day, beating back cold by stoking fires, planting gardens, making love.