Before I was old enough to fold up pain and carry it in my wallet,
I was paid to open the vet’s office, stand in the corner and watch men cry,
their ears pressed down by the loneliness of a wordless decision.
While an animal pawed at slick metal, I catalogued each retreat:
how owners peeled themselves from the wall to press their lips
against a dusty feline head, their nods at the floor before sniffing
and making an exit. I remember, years later, pedaling my bicycle
through the mountains, meeting the exposed face of a gutted bluff,
jagged and leaden. The morning was so quiet I could hear fog spilling
across the road like slow marbles, blotting the cliff’s rough edges
and carrying the wisdom of the dead. A row of trucks rested in line,
engines cold as unpacked syringes, my legs aching and calicoed by shadows.
The skint ridge glinted wordlessly, what we’ve taken to mean permission––
the world crawling across itself like a cat with broken back legs.
I thought back to the room with a polished steel table. The matted underbelly
and dried-out veins of leaves. How I would unlock my hands, twist the knob,
and bend through to see the doctor pressing down a needle plunger,
thumping out any air. After the first time, he asked me,
Do you want to know how to tell if it’s gone? His finger bent
like a churning backhoe. He leaned in close and pressed his nail to the black center
of the cat’s eye, said Look, and buried it slowly. It doesn’t blink. 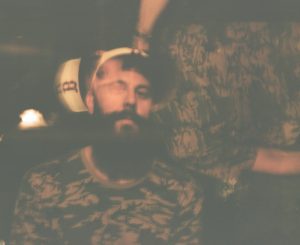 Brandon Jordan Brown is a 2014 PEN America Emerging Voices Fellow, winner of the 2016 Orison Anthology Poetry Prize, a scholarship recipient from The Sun, and a former PEN in the Community poetry instructor. His work has appeared or is forthcoming in Grist; Winter Tangerine Review; Scalawag; Forklift, Ohio; Birmingham Poetry Review; Radar Poetry and elsewhere. Born in Birmingham, Alabama, Brandon currently lives in Portland, Oregon. Find him on Twitter @brownbrandonj or at brandonjordanbrown.com