Before Scheele, all manmade green faded to a dull brown. Outdoors, the green of lime, moss, shamrock. Green of the deep sea & sea kelp. Mint & myrtle, pine & tea. But inside only the dreary sun-bleach of nettle, leek, birch. The whole world burst each spring with a green so bright it made even the white folks forget the coming summer fevers. & though those greens would never last, we longed to be such bright lit things. To swing in emerald dresses. Dine in rooms of forested fern. So what’s a little arsenic? A dead cow or two who grazed the green grass near Scheele’s discarded water. Soon all the world bloomed with Paris green. Wallpaper men licked their bottle green wallpaper to prove it was safe. Little Johnnies ate hard candy the color of a city not yet invented in Oz. Scarletts wore green curtains after the war to remind themselves of better times.  Everyone just mad with green. Olive candles flickered in the night, air sparked with poison. Green butcher paper to wrap fresh cut mutton, green stamps to send news & gossip to those in a place spring hadn’t yet touched. A green so rich never mind the shits. Headache & nausea would send the sweeping mistress to her room to dream of fairy wings & lily pads & the four leaf clovers of home. The dream-green of calves, the last green of the little exiled emperor. The envy-green of Carl Sheele gasping his last breath, body diseased by a lifetime of tasting his work. Borax’s green burn. How his printer had dawdled with his treatise on fire-air long enough for someone else to discover oxygen. Verdigris green of sturdy French women scraping wine soaked copper. He vowed this would never happen again. Made sure to put his name on the green that colored the west for over a hundred years. Verona green of crushed clay still clinging to the walls of Pompeii. Green of hope, of permission. The only color a new bud refuses to carry, & the green green of our long wanting. 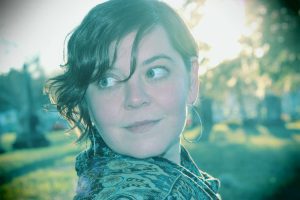 Danielle DeTiberus teaches creative writing at the Charleston School of the Arts. In 2016, she received a poetry fellowship from the South Carolina Academy of Authors. Her work has appeared in Best American Poetry 2015, Arts & Letters, The Missouri Review, Rattle, River Styx, Spoon River Poetry Review and elsewhere. She currently serves as the Program Chair for the Poetry Society of South Carolina, bringing nationally renowned poets to Charleston for readings and seminars. More of her work can be found at www.danielledetiberus.com.