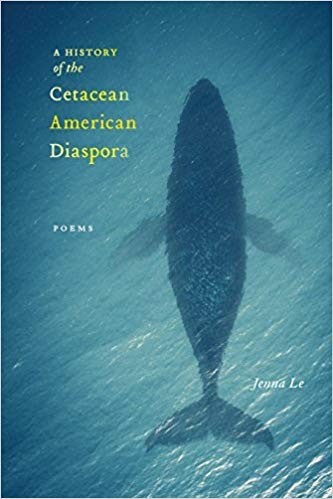 A History of the Cetacean American Diaspora by Jenna Lê

Jenna Lê’s book A History of the Cetacean American Diaspora probes the intricacies of generations, place, and displacement, providing us with insights both into the micro world of her family and the larger worlds of our communities. Her work employs both the nuclear family and the natural world to explore relationships among us, in all their various forms. Structured after Genesis 1:21, Le divides her poetry book into three sections: the first entitled, “And so God created great whales,” the second section “And every living creature that moveth” and finally “And every winged fowl after his kind,” following the clauses of the Biblical verse. What we read is a history that is reminiscent of some of the historical elements of the Pentateuch, perhaps. The stories of ancestors: the stories of generations as they sought a new home in the Exodus. The expectations and the daily life in the midst of adapting to a new home. We follow the whales, we learn about them, and we also follow other creatures and so much more in this wonderful bestiary of poems.

There is an abiding obsession with the sea in these pages, alternating with admissions of a life spent growing up in the heartland. Whales and other animals such as dolphins, cuttlefish and ducks, navigate these pages, as mirrors of much of what makes us human. We learn of the whales that:

they have sex face-to-face,

pausing only to breathe

Lê, who sees in these migratory animals a companion for her family’s story, explores the rich associations we have with whales. But the poems go much deeper than just whale comparisons.

In this book, we continually probe the relations between the generations in an Asian-American family – parental expectations for children, parents and their adult children. The poems document the differences in what each generation has been able to do in terms of work and the expectations placed on kids by parents. At turns, some poems try to understand the older generation, and its traditionalism while others examine the rituals of daily life and how they became adapted to life in the US over time. A reader can feel the shifts between generations and in locations as the younger (second) generation becomes westernized.

She’s also attuned to the expectations and traditions of domestic life within Vietnamese families. Several of her poems write about various traditional foods, such as Bánh Xu Xê, a wedding cake.

“No pastries she makes henceforth on that stove

will taste good as those first flawed couplings

blessed the hut where the newlyweds made love.”

There’s a delicacy in her look at the culture she has inherited. In this poem, she compares a couple’s wedding night to the wife’s first attempts to make a traditional cake on the morning after their wedding. Indeed, many foods have a strong sensuality in her writings.

Her parents’ arrival in the USA is frequently alluded to in poems, but in such a way as to resonate with other immigrant stories – their stories are openings, not narratives set in stone.

There’s a long poem in the middle of the book, a retelling of Exodus in the vivid details of the parents and children, looking at the hardships and the kids’ reactions to having to help others who are also immigrants. The book also looks at the stories we tell about the ancestors and what counts as virtues: her mother’s soft, always clean hands; the ancestress who, when she died, did not even leave a smudge of sweat on the bed (30).

Lê’s immigrant stories still have connections to precious lands left. In “Công Binh,” Lê traces the long reach of World War II into Indochina. The past shapes the present even in new countries too: in a poem about making a corn pudding that her mother would make, and bring out the good finger bowls for, Lê considers the vagaries of history – the random events that change course for people. In this case, it’s a small changing of course. This growing of corn and the ritual of making the pudding are clearly quite important to her mother; then one year, squirrels get to the corn crop first, and the ritual is abandoned for good. The reader can feel the child’s sense of recognition that there is something special in this yearly ritual, and also the sense that some understanding is missing, meaning we – alongside the daughter – don’t quite understand the significance of the event fully.

In Lê’s telling, immigrant life is the continual living in a place and recognizing that that form of living is essentially distinct from the lives of others sharing the same location. It’s also the realization that the children’s lives often have much more privileges and possibilities than the parents had. This is so well captured in her commentary that on the night of her prom, her parents

snapped more than fifty frames of that

inconsequential night in May –

my parents, who don’t even have one photo

The pathos of the different circumstances of the generations is so clearly felt in the little moments in these poems. A similar awareness of interrelatedness inter-relatedness is also seen not just across generations but in the stories of other immigrants as well. Lê writes of one family that comes to live with them after arrival in the USA. She also thinks about Mitsu, a middle-aged woman who married an American and came to the USA. What this book balances so well is the individual voice, and its development of an identity in the speaker, and also the sense of being very much a part of the trajectory of the book.

These intimate portraits of parents and children, born in different countries, and learning to navigate their world with slightly different compasses are augmented with vignettes of people, maybe current, maybe historical. We meet a number of historical and literary and mythic figures, such as Gilgamesh, William Butler Yeats, Othello, a muse, Spencer’s Faerie Queen. The people on Noah’s Ark. In each, Lê infuses her own experience of human relationships to bring these characters to some new investigation. Her commentary on Yeats’ last mistress Margot, seems a fitting observation for many of the characters in her book, that she:

her epic poem not yet written.” (14). So much of the book is a quiet striving in each of the characters. It is an intimate book of people who make the best of what they have, while wanting more for their children.

Other poems look at issues much more current, such as “Sonnet Written on the Way Home from the Cinema” which looks at the lack of Asian American central characters in film. in the poem “Punch Clock,” Lê comments on the casual racism of a coworker chiding her that her hand does not seem to work with the biometric reader. t shows how all interactions, even casual ones at work, can easily come to have a sheen of racism to them.

Her poems also just cover some really interesting topics. One of my favorites, for its sheer unlikely topic, is “A Bruxist Manifesto” in which she probes the act of grinding one’s teeth when anxious at night, and how that can bleed over into one’s waking hours as well.

Her keen eye as a physician also comes out, in reflecting on the changes on her body, on thinking about her patients, and thinking about how parents celebrate children who become physicians. The bodies of others catch her attention, whether it is the way other animals mate, or the bodies of her patients or her ancestors. Towards the end of the book, the bodies of the book become more and more often patients’ bodies. From Monique’s body which sweats so much in death that they cannot use the EKG to check for a lack of heartbeat. To the Asian-American father talking about his daughter who has started med school while he is going through chemo. To the boyfriend who worries about HIV. The animals also become edgier. We meet an owl who tells us seeing a child die of starvation is the best form of birth control.

Overall, this collection of poems is a brilliant, thought-provoking look at families, and the immigrant experience. It includes rich details about life, especially life lived within more than one culture, and meditates on the shape of that life. It entertains us with unusual reflections on animals, and the life of the work of a physician. It is a book whose depth will continue to engage a reader on repeated readings, and one whose message far exceeds its own initial world.

Andrea Janelle Dickens has an MFA from Ohio State University and Ph.D. from the University of Virginia. She teaches in the Writing Programs at Arizona State University. Her work has appeared in Thin Air, The Found Poetry Review, New South, The Wayfarer, and Ruminate. In her spare time, she tends bees and a makes pottery.