A boy was born with a pagan name in Palacios, Texas. At the

baptism, the priest pleaded his mother to give her son a

Catholic name. This is when Jesús

dived into the river between Jacinto and Cardona. He loved

eating bread in the shape of a pig on the

George Washington bread for his mother, who ironed on

humid autumn mornings and took him by the hand

into a school with one little, two little, three little boys with brown skin like

Jacinto’s. His Friday nights were spent in

khakis and loafers, headed downtown to see movies about black

lagoons or 50 foot women. He waited for his father to return home at

midnight, smelling of grease. He was the

number one fry cook in Alice, the Hub of South Texas.

On days of his father’s last summer on earth, Jacinto wondered if the taste of

pancakes still lingered in the corners of his mouth. His father slipped

quietly out of this world, with shoes that

read “L” on one and “R” on the other in thick sharpie.

the weeds and wildflowers out of the way of bronze plaques. He

used to write poems to honor the

veins of his mother’s life, a woman

who did not know how to sign her name, only a lonely

“X” on the page. Now Jacinto teaches the

youth about Jane Eyre and hero’s

zeniths, and words that his mother could never read. 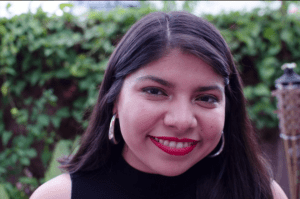 Claudia Delfina Cardona is a Tejana and Xicana poet proudly born and raised in San Antonio, Tejas. She is a graduate of St. Mary’s University and a current MFA Poetry Candidate at Texas State University, where she is the 2017-2018 Editorial Fellow for the Center for the Study of the Southwest. She is also the Editor-in-Chief and Co-Founder of Chifladazine, an online and print publication that is dedicated to showcasing the creative work of Latinas and Latinxs. She is currently writing dreamy poetry in San Antonio and assisting with the organization of the San Anto Zine Fest in Fall 2017.