I was almost named April, an easier name for me to pronounce and others to spell, a month announcing beauty, falling blossoms, a welcome change. A spring breeze, easy to love, easier than me, so maybe they were right not to give me a name sure to evoke petals, not panic. Jeanne d’Arc, a different kind of girl, burned at the stake at nineteen for being too strong, too good at being in charge. A peasant who talked to God, who led armies, whose king betrayed her and whose enemies burned even her horse, fearing her power. Two kinds of women – women who are petals and those who are peasants, women who burn and women who flower. In the evening my body burns, nerve tips tingling, sending me signals of fire that aren’t there. Maybe my brain was damaged by God, a heavenly touch too dangerous, leaving charred fingerprints. A writer who can’t control her fingers, sometimes even can’t form words, is a girl captive, losing a war, odds stacked against her.  Let the nighttime winds bring in the scent of lilacs, the small pink detritus of cherry trees, let April return to soothe the roots with rain, the cold with pale sunstreaks. I will not be April long. I will follow my namesake into the flames. 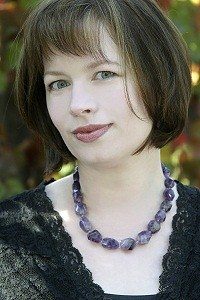 Jeannine Hall Gailey served as the second Poet Laureate of Redmond, Washington. She’s the author of five books of poetry: Becoming the Villainess, She Returns to the Floating World, Unexplained Fevers, The Robot Scientist’s Daughter, and Field Guide to the End of the World, winner of the Moon City Press Prize and the SFPA’s Elgin Award. Her work has been featured on NPR’s The Writer’s Almanac, Verse Daily, and in The Best Horror of the Year. Her poems have appeared in The American Poetry Review and Prairie Schooner. Her web site is www.webbish6.com.