Every time I hear the band REO Speedwagon
I’m reminded of someone
else’s high school memory, the one
where they sit alone on the school bus
forlorning out the window, Walkman in hand,
and the driver slows but ultimately passes
their crush’s house cause it’s September
and she moved in July without saying goodbye,
but the truth is I never hear songs popular
in my high school: Black Sheep, N.W.A, Public
Enemy, the Geto Boys—blasted by white
farm boys who’d make little of their lives
doin whip-its in the woods. Boys cloaked
in varsity jackets, football jerseys, their blue
jeans half off their asses, bunched at their ankles
like foreskins. And to me, a city girl moved up
north to the country, whose tattered Club Beverly
Hills sweater and bangs stood high and alone
in those hallways, or forested state lands,
where I’d get drunk on Genny Light cause
that’s what we did here, gather around a keg
carried by someone’s older brother, spit
words to songs that weren’t about us
and never would be. There I abandoned
Catholic virtues and Latin masses, embracing
instead the necks of boys to see how many
I could kiss in one night, softly pushing away
clammy fingers wriggling toward my breasts
and panty line like tentacles. There in the New York
mountains we’d pass out in half-propped tents, wake
to the crackling of last night’s firewood
rekindled, humus strewn with red and white
cups opening their mouths towards us like flowers 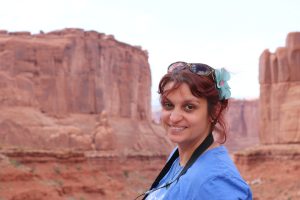 Michelle Bonczek Evory is the author of three chapbooks of poetry and the Open SUNY Textbook Naming the Unnamable: An Approach to Poetry for New Generations. Her poetry is featured in the Best New Poets Anthology and has appeared in over eighty journals and magazines, including Crazyhorse, cream city review, Green Mountains Review, Orion Magazine, The Progressive, and is forthcoming in Wasafiri: The Magazine of International Contemporary Writing. In 2015, she and her husband poet Rob Evory were the inaugural Artists-in-Residence at Gettysburg National Military Park. She holds a PhD from Western Michigan University, an MFA from the Inland Northwest Center for Writers at Eastern Washington University and an MA from SUNY Brockport. She teaches American and environmental literature at Western Michigan University, and mentors poets at The Poet’s Billow (thepoetsbillow.org). ​