time. He watches red cars glint in the sun as they drive.

She tells him he needs to learn a shloka. She’s making him sing it at

Temple Sunday where the incense smoke soaks into his clothes.

distracts him from the woosh of shiny cars passing by, but he knows

better than to bargain with a voice that stills him.

sullenly. He repeats as she corrects his duhs & dhuhs. Her voice soothes but he

remembers the lady in Apollo 13 humming her sweet song in the shower.

He is determined not to let beauty lull him into false security. That

mother’s voice could drift out of his reach at any moment. This is

why they teach detachment at Temple.

He repeats, in his head, until the syllables that are not yet words loop,

until the sounds that are not yet symbols are recited automatically

when his Mom wakes him from the couch to go sleep upstairs.

of Sanskrit syllables to clutch,

but only in the dark. 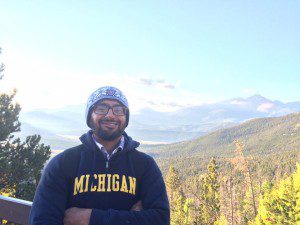