Marked by clearwinged borers. Peachtree. Dogwood. A handbook of larva pearls. Banded ash. Early signs include the wilting of terminal shoots. A diminished crown.  Infestation sites often are marked by cankers, calluses, or cracked bark. As though hallowed. Marked. Distinguished from others according to a small sign pressed on the surface. A pin scratched across a card to facilitate cheating or conjuring during play of the game. Grapheme. Spell. A symbol to return to. Some call this obsession. Large limbs die or weaken enough to break in the wind. Marked. Inscribed by an outside hand. A red cross. For hunt. Prepared. A hide restless under the red spot of sight. Sight—a noun to signify the mind that chooses what will die. Marked. Hapax legomenon. We can read it once as a flash into other light. A handbook written in bored script. A pear tree. Appeared, as though illusion, singularly. As though sight allows no thing to receive us twice. As though banded ash. Under the bark, the wriggled pearls. Callus under the trigger finger. Reveals green under the skin. Established trees persist in poor conditions and year after year are re-infested. A woodpecker abandons the body. Bark abandons. Crown foliage abandons. Limbs abandon the body. Every illusion suffered causes the illusion to manifest. The body of a witch wasn’t always woman. Take a text and paint it red. Point to the tree. Point to the tree, say it wasn’t me, it wasn’t me. 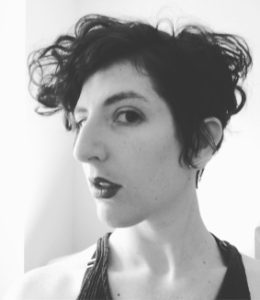 Madeleine Wattenberg’s poetry is forthcoming or has recently appeared in journals such as Fairy Tale Review, Hermeneutic Chaos, Mid-American Review, Muzzle Magazine, and Ninth Letter. She regularly writes reviews for The Bind and is a PhD student in poetry at the University of Cincinnati.