double hemmed, that drag up dirt like dying smoke plumes.

Sometimes the ground is already bright and blood-splattered.

It is always too hot.  Pesos are wagered on the flail of wings and

quickness of feet fettered by metal spurs; wagered on the

congenital male aggression of the species.  But, o, how tender

the gallero puffs air from his mouth onto the gamecock’s

head, under the gamecock’s wing, as if willing it back to life

in a kiss.  He’ll attempt to prop the animal up, its beak limp

and desolate.  Like the fowl, contestants in the town’s beauty

pageant are all ruffle and strut under the plaza’s temporary

spotlights.  Somewhere behind the stage there is a fog machine.

disappeared by men with AK-47’s, el Pelón had to do the job.

Chuy’s eleven-year-old son, Piquín, took the call from the morgue

and gave a DNA sample when Nicanor the Undertaker’s yet

unidentified body turned up in Santo Tómas.  Piquín was seen

kicking in the rusted yellow door of the neighbor’s truck.

The day the men went searching, some came back with finger-

nails like dark crescent moons. At night, the banda played 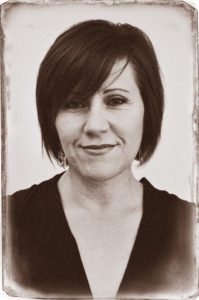 Hecha en México, Norma Liliana Valdez made her way to California in her mother’s pregnant belly. She is an alumna of the VONA/Voices Writing Workshop, the Writing Program at UC Berkeley Extension, and was a 2014 Hedgebrook writer-in-residence. She was the poetry winner of the 2015 San Miguel Writers' Conference writing contest, and a 2016 Under the Volcano fellow. A member of the Macondo Writers’ Workshop, her poems can be found in Calyx, Dismantle, Poetry of Resistance, and Huizache, among others.