I say we live in ocean | you say in sky

this much is true | my mother was a girl

twisting loose the copper faucets | filling the house to the roof

your father was a boy who walked through stars

when he should have been walking home

the curse is | without lungs & without gills | where can she breathe

your father would stand so still at altars

so the angel’s wings became his wings

the curse is | the angel’s wings became his wings

—all those furious wings

all those men into gods— 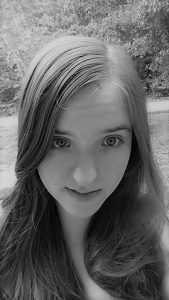 Melissa Atkinson Mercer is the author of Saint of the Partial Apology (Five Oaks Press, 2017) as well as five poetry chapbooks, including My Own Strange Beast (Porkbelly Press, 2017) and ghost exhibit (forthcoming, Glass Poetry Press). Her work has recently appeared in Bone Bouquet, Blue Earth Review, Storyscape, and others. She currently works and teaches at Lees-McRae College.