I have much of the martyr, would set myself afire

if I wasn’t raised by a woman born two centuries ago.

My ribs would form a cathedral’s arch

above my dark hair,

fingers each would tremble,

if she hadn’t been born two centuries ago.

“Martyr” — from the Greek mártys, to “witness”

The legend of Griselda speaks of the daughter of a poor man, a sickly man, who kept them alive by the spinning of wool. A marquis noticed her “virtuous habits,” “sober behavior,” and made her his wife. He spends twelve years tormenting her with concocted tests: Tells her their daughter must be killed as she’s low-born, the same for their son. Sends Griselda bareheaded, barefoot, and naked, except for a slip, back to her father. The story goes she never lost her cool. Time passes and Mr. Marquis sends for Griselda to make arrangements for a new young bride. Of course the bride is the daughter-not-killed accompanied by her brother-not-killed and Mr. Marquis loves grateful Griselda for her obedience and all her affection. Bullshit. He’s smoke-char and asbestos robed, burnt down by some long winter psychosis.

Once, in the small kitchen of my mother’s small house,

to the back of my thigh and it stuck.. Angels visited the nights I hid

behind trees across the street. I watched like a wet dog in the rain as her master moves through a dry
house.

It’s hard to explain why I stayed so long.

“Witness” — from witnes as in knowledge

In 1650, near Oxford, Anne Greene was hung for murdering her newborn child. She’d biblically known her employer’s (Sir Something) grandson but not of her pregnancy. Still accused she was of murder though the thing (a boy-child?) was not over a span; just clump of clotted matter passed dead in the house of office. On December 14th in a cold rain she swayed with the noose ‘round her slim neck. Witnesses thumped her breast, pulled her legs, and jerked her forearms to be sure she was dead. Later when physicians bent to dissect her she breathed. Convinced she was forgiven by God they revived her and a spectacle was born. Her suffering tale and noose-mark folks paid a small fee for. They asked if she recalled anything angelical while she hung dead. Death wrote her martyr, granted her fame, but a witness made her not.

My son and I crouched in a back-bedroom closet

as his father cranked

Seeger’s “Hollywood Nights” as homage to an ex-fiancée

She was blond with a straight-toothed smile

while mine are the crooked teeth of a mother born almost a century ago.

“Husband” — from the Middle English husbonde, frugal manager, master of a house

Elvina Apperson Fellows’s first husband was a cook named Julius. In 1851 they married; she fourteen, he forty-four. Oregon pioneer-wifedom, Elvira wrote, could be equated with slavery of Negroes in the South. Drunk most of the time and when drunk, often wanted to kill her. He used to beat me until I thought I couldn’t stand it. One night she hid in her mother’s house, like I hid behind trees in the yard, and he took out a pistol and shot through the window. The bullet passed over her head; out of fright from shattered glass she dropped to the floor. Julius thinks she is dead as next he put the pistol’s barrel into his mouth, pulled the trigger and I was a widow.

In the last century I left my husband and son. 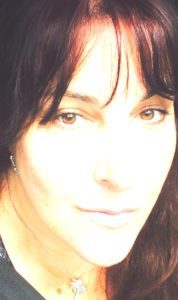 Judith Roney’s fiction, essays, and poetry have appeared in numerous publications. Most recently, her chapbook, Waiting for Rain, received an honorable mention from Two Sylvias Press, and Field Guide for a Human was a 2015 finalist in the Gambling the Aisle chapbook contest. Her poetry collection, According to the Gospel of Haunted Women, received the 2015 Pioneer Prize. A memoir piece, “My Nickname was Frankenstein,” is nominated for a Pushcart Prize. She confesses to an obsession with the archaic and misunderstood, dead relatives, and collects vintage religious artifacts and creepy dolls. Currently she teaches poetry at the University of Central Florida, and is assistant poetry editor for The Florida Review. More information can be found at www.judithroney.com