An escape with no clues left behind. Slang. Obsolete.

Like Amelia over the Pacific, Barbara into a December night

We need lost women like ancients needed fire—hot coals carried in chaga mushrooms to burn slowly without flaming or going out. We live dutifully among the living. We only carry enough hot ashes to smoke our rooms in incense. Yet the smell of us is stronger than prayer. We’re listening for the mindfulness bell that signals the end of the silent period. Time molders as we wait our turn. Welcome to Words Own Her, a life. Just press and flip the pages with an eraser.

She’s a woman we’ve never heard of destined to be the Next Great American Writer. By the time she’s fourteen, she’s published two books and written countless poems. Her 1927 debut novel, A House Without Windows (lonely girl runs away to live in the wild as a wood nymph) receives glowing reviews from the New York Times and H.L. Mencken is congratulating her parents for raising her.  Voice-overs and avatars. Everybody loves a child genius. At 13 she works as a deck hand aboard a lumber schooner from New Haven to Nova Scotia researching her second book, The Voyage of the Norman D. More praiseful reviews. Society has a taste for the untimely success, but what is extraordinary? Living up to destiny or suffering it?

Her father leaves for another woman. With typewriters and little else, mother and daughter embark on an open-ended trip: Barbados to Panama, Tahiti to Tonga, Samoa to Hawaii. After a year, her mother leaves her with a guardian, but she flees to a hotel in San Francisco to write poetry. She is still famous at 15. A contemporaneous Los Angeles Times headline reads: Child Writer In Revolt.

Here we reach the core of the problem: will she be a she, or will she be an I? Third person limited or first person singular? What is a person? According to the Oxford Dictionary: A human being regarded as an individual: She is a person of grit and depth; legally, an unspecified individual: The hotel rate is $2.50 per night per person; in singular with modifier, an individual characterized by a preference or liking for a specific thing: She is a wilderness person; an individual’s body: Detectives who catch her trying to escape out the hotel window note she has money on her person; a character in a play: Her role in the person of a notorious girl on the run. Origin of person: Middle English: from Old French persone, from Latin persona, ‘actor’s mask.’ What kind of play is she in, “finished by a death” or “ended by a marriage?” Words that rhyme with person: worsen.

She pulls her life closer to examine it; it blanches, then bruises under the pressure of her thumbs. Becalmed might describe the final months of her known life. Pick a side—ringside, wayside, blindside.

December 7, 1939, after an argument with her husband, she walks out with $30 and a notebook and is never seen or heard from again. She is 25.

Her life plays like a film short with a stunning opening and a stolen reel. 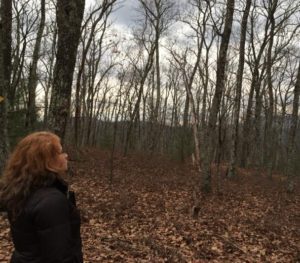 Lynn Schmeidler’s poems have appeared or are forthcoming in The Awl, Barrow Street, Boston Review and Fence, as well as various anthologies including Transition: Poems in the Aftermath (Indolent Books), Drawn to Marvel: Poems from the Comic Books (Minor Arcana Press), Mischief, Caprice and Other Poetic Strategies (Red Hen Press), and Nasty Women’s Poetry Anthology: An Unapologetic Anthology of Subversive Verse (Lost Horse Press). Her chapbook, Curiouser & Curiouser is available at Grayson books http://graysonbooks.com/curiouser--curiouser.html where her forthcoming chapbook Wrack Lines will also be published. The poems appearing here are from her most recent poetry manuscript, History of Gone, which was a finalist for the 2016 Eyewear Publishing Sexton Prize.