The wound was obvious once he pointed it out –
the light was a symptom of dying.

I should have known this,
having grown up in the glare of a great absence.

He gestured me to come and stand
with him, to look up into the canopy,

pointed out the thinning, the blue
gaping pieces of sky.

The arborist explained when a maple is well
there are no breaks in its shadow.

I saw the shade in my childhood
sliced through with light.

I used to walk my cousin
two miles to school each morning,

and make up stories about the trees,
tell her their names, their intentions.

and through its twining thirst
the tree was slowly strangling.

I wonder if all suicides begin like this,
with something unquenchable.

shouting their fragile exuberance
into our yard’s new light. 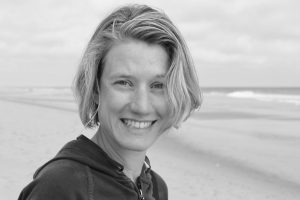 Alison Prine’s debut collection of poems, Steel (Cider Press Review, 2016) was named a finalist for the 2017 Vermont Book Award. Her poems have appeared or are forthcoming in Plough-shares, The Virginia Quarterly Review, Shenandoah, Field and Prairie Schooner among others. She lives in Burlington, Vermont where she works as a psychotherapist. Visit her at alison-prine.com.