with lines from “The Robber Bridegroom”

When the right kind of man came along, I woke
in a room stacked with waiting plates, my very own spoons.

The day broke warm on the outskirts of winter. I bathed,
dressed early, cinched my grandmother’s gold on my neck.

Pictures, my brothers laughing. Someone said, You should eat.
Someone said, I will make you a trail of ashes. Me?

Later he’d say he went for breakfast, felt sick, got caught
on the far side of town by the train. The quiet song

of the front door hinge caused my heart to break.
Bare-armed, I waited, one last borrowed room

bundled with flowers and chairs. The organ began,
optimistic. Later I’d say, Let me tell you a dream I had:

the naïve light of morning, my dad’s warm arm,
that red aisle, tether and bridge. A line of fine men

on the altar, him first and hiding a smile. Later
we’d say something showed us the way

in the moonlight, that we walked all night.
The wind had scattered the ashes.

A house standing all by itself. I wandered
from one room to the next.

And here is the finger with the ring still on it. 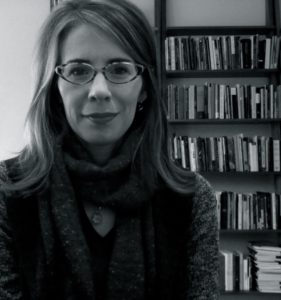 Molly Spencer's recent poetry has appeared in Blackbird, FIELD, Gettysburg Review, New England Review, and Ploughshares. Her critical writing has appeared at Colorado Review, Kenyon Review online, Tupelo Quarterly, and The Rumpus. Her poem, “Interior with a Woman Peeling Oranges, Snapping Beans,” won the Poetry Society of America’s 2018 Lucile Medwick Memorial Award. Molly holds an MPA from Columbia University’s School of International and Public Affairs, an MFA from the Rainier Writing Workshop, and is a Poetry Editor at The Rumpus. She teaches at the University of Michigan's Ford School of Public Policy. Her debut collection, If the house, is forthcoming from University of Wisconsin Press in Fall 2019. Find her online at www.mollyspencer.com.