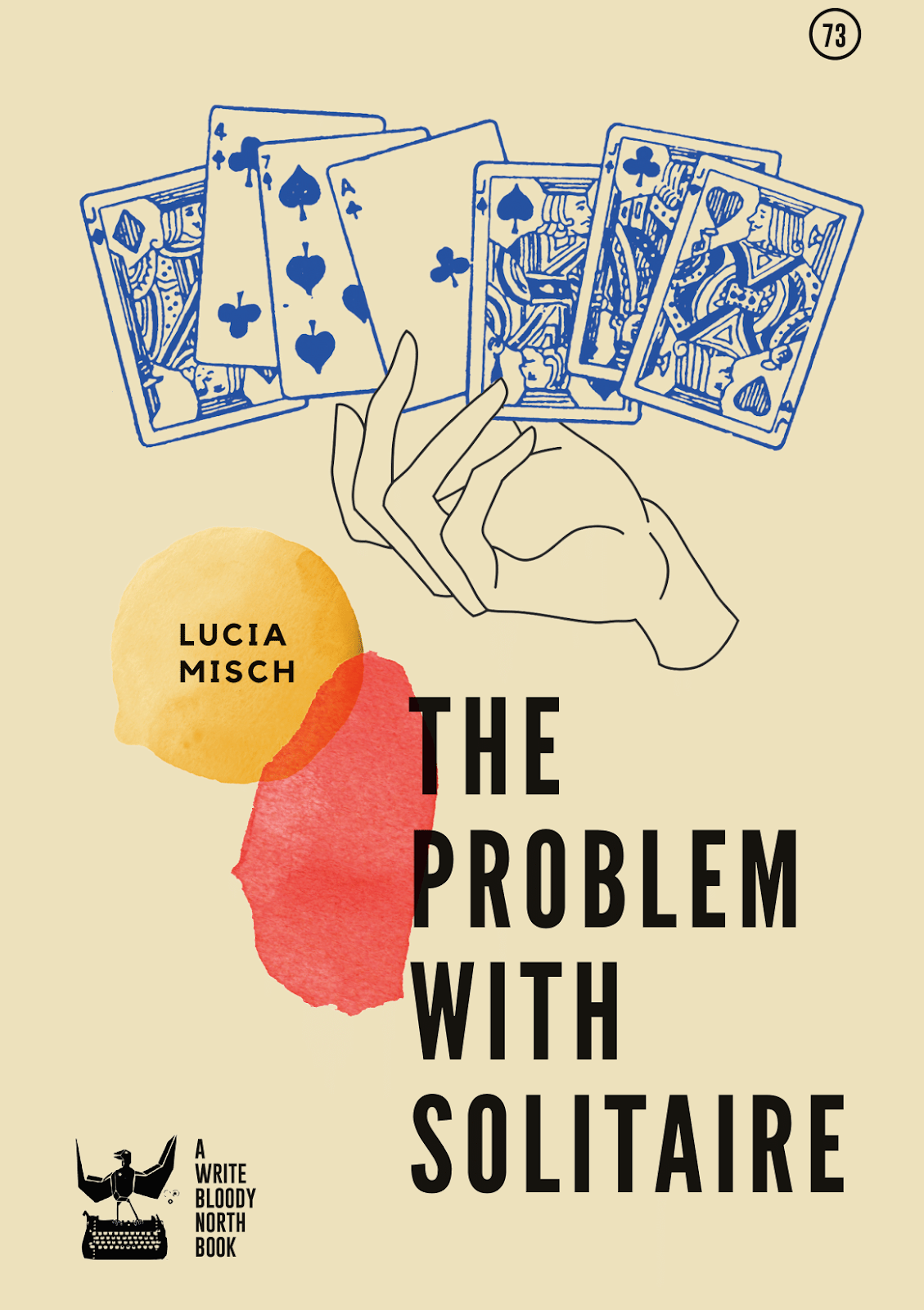 Every so often you read a collection of poetry you love so aggressively that you can’t shut up about it. This is exactly how I felt when I read Lucia Misch’s debut collection, The Problem with Solitaire (Is That It Can Be Hard to Tell If You’re Playing Yourself) from Write Bloody North.

I annoyed my roommates for days as I pored over the pages, enraptured by the collection’s wry and distinct poetic voice, its remarkable mastery of image systems. “I wish I’d written this,” I declared aloud in ten-minute intervals. (“Yes, you’ve mentioned,” – a proverb, my roommates).

Cards on the table: I have been desperate for a book of Lucia Misch’s poetry to exist for years. I didn’t even know I liked poetry until I saw her perform at an open mic in the autumn of 2008 at the late Rhizome Café.

“You can do this?!” I thought, an art form blossoming to life before me.

After the event, I bullied Lucia into being my friend over cigarettes split under a slender awning. I’m glad I did, because blowing my mind with her words was not a one-time event. For years Lucia Misch has been my personal road map for what can be achieved with poetry, for new ways to excavate the world with words.

When her inaugural collection was finally announced, I immediately threw my name on the pre-order list. When I finally got my hands on it,it did not disappoint.

The Problem with Solitaire is 95 pages of well-packed punch. Touching on mental health, queer love, and metaphysical angst, the poems in The Problem with Solitaire lurk in the bizarre homes of the ultra-rich in Vancouver and linger in heart-to-hearts shared on the shoulders of California highways. It hangs out grungy basements, dive bars and diners, sea sides and bathtubs. Each location brings the speaker back up against themself, providing  the same old anxieties, the same old delights, the same old griefs.

This collection is a reluctant celebration of both the effective and ineffective coping mechanisms we employ in the face of hardship, and is a testament to keeping one’s sense of humor. This is well exemplified from the poems “Three Acts” —

“if it weren’t for my crushing mental illness

I’d never see the inside of a gym.

with what little upper-body strength I have.”

“To relax, my girlfriend likes to go to spas in fancy hotels,

be massaged with salts and oil, steamed like a bok choy.

I prefer bars with bad lighting, to get drunk

and yell my secrets at anyone who won’t remember them.”

Who knew you could make depression funny? The wit in this collection is full of intellectual vulnerability, a blueprint of a personal yet relatable brokenness. Aren’t we silly but so, so serious? The work asks. Misch basks in the absurdity of having a self and existing in the world, holds our gaze to it. This is beautifully illustrated in the poem “There Are Some Kinds of Wealth I Want, and Some I Don’t (Or: The Abysmal Glitz one Might Encounter while Fixing the Air Conditioners of the 1%) (Or: When Not to Do the Macarena)”:

“They have a better view than the space station,

and small fleets of Range Rovers—

A Range Rover can get so lonely on its own.”

While this could be read as merely a quippy and sarcastic observation of a single rich person’s purchasing proclivities, it also points to how we deal with these monstrous inequalities.

“I was nineteen, with no idea

how a body can misplace

the meaning of enough

…Years later, a friend told me

that German has no word for addict.

Instead, the person who cannot stop

grinding himself to powder

is called a seeker.”

Strung like fairy lights through the collection a weighty question illuminates each poem: when we are our own worst enemy, who wins? From “Maybe She Didn’t Think It Was A Good Time For A Tennis Metaphor:”

“what the doctor doesn’t say

as she writes a prescription

for a new mind

is that the wall I’ve been playing

against may have made me

accustomed to a certain

After considering these queries and scouring for solutions to both self-made and inherited problems, where The Problem with Solitaire perhaps lands is on the frustrating truism that some questions don’t have answers, only educated guesses and our best hopes. The poem “The Problem With Being A Box Too Small For Its Contents” has a line that I think contains what is this collection’s ultimate wish:

“may you rejoin yourselves

even when you don’t want to.”


_______
BIO:
Erin Kirsh is a writer and performer based in Vancouver. A Pushcart Prize nominee, her work has appeared in The Malahat Review, Arc Poetry Magazine, EVENT, Vagabond City Lit, Cosmonauts Avenue, Noble/Gas Quarterly, and more. Visit her at www.erinkirsh.com or follow her on twitter @kirshwords.