I played with the sunlight splayed between grains, haloes

of ash around her sleeping eyes. Skeleton stalks moving

briefly in the yard. She told me about the bees, how in winter

they expel the crumpled bodies of their dead, dropping shells

one by one onto the dirt. Hive’s center, the queen warms herself

on honey. I think of the artist who scooped them in her palm,

sealed them in bags, left them in the window. Wheat shocks,

summer dark. An hour lying in the grass. Emptiness itself cuts

along the bank. I wanted to make this vivid, so vivid. To say

a passerine flits in the wind. Pistil, stamen, pollen floods my nose,

Sea’s rush, river’s stop. Seepage from a well. Everyone believes

in one rapture or another. It is summer, I am thirsty. My canteen 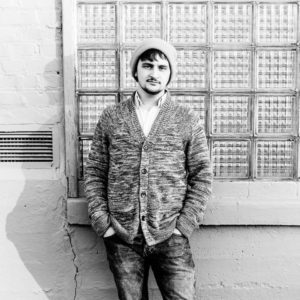 John James is the author of Chthonic, winner of the 2014 CutBank Chapbook Award. His poems appear or are forthcoming in Boston Review, Kenyon Review, Gulf Coast, West Branch, Best New Poets 2016, Best American Poetry 2017, and elsewhere. He serves as graduate associate to the Lannan Center for Poetics and Social Practice at Georgetown University, where he directs the Summer School's Creative Writing Institute.