considering our stagnant     it drags

my fingers flip a magazine against

about the swiftness of his hand

the quickness of death

not walking distance but close

where men are catching

he catches me gazing

bats at the fly on my plate

the television on        naturally

not unlike chewing a piece of old gum

my brother is picking his toe with a pocket knife

news or advertisements       something just decipherable

we sit without speaking now        framed per usual

a cage of windless protection

my brother is moving his lips like a scavenger

i am choking halfheartedly

the way we’re both smashing

i remember the day i found that dragonfly

quivering on the river’s surface

as if it was still flying 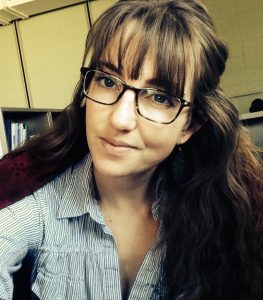 Valerie Stull eats insects. She climbs mountains and has strange visions during migraines. She's a poet and environmental scientist finishing her PhD at the University of Wisconsin-Madison, where she contemplates sustainable agriculture in the age of climate change. Born and raised outside Boulder, Colorado, Valerie feels akin to the mountain dweller, though she currently resides among lakes. Her work has appeared in Spiritus Mundi and a handful of academic journals.