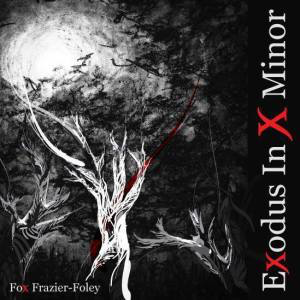 
Fox Frazier-Foley’s author bio states that she is into Haitian voodoo, but that ends up being perhaps the least interesting aspect of her new poetry collection, Exodus in X Minor. Instead, it is the weaving of varied perspectives and experiences that pulls the reader through the book like a thread through the length of a sweater. While some of her poems stand alone, many of them belong to one of several distinct arcs. These are not presented grouped together— Frazier-Foley disrupts their narrative and heightens the impressionistic effect through her studied division. With other sequencing, this would be a very different book.

One of the arcs deals with the St. Patrick’s Day Four, a group of Irish-American Catholics who in 2003 protested the Iraq War by pouring their blood over an American flag, the walls, the windows, and some posters at a military recruiting center. While penetrating the dense language of these sections might be tricky for those unfamiliar with the group and their actions, the poems offer enough concrete detail that Google can help. Also, Frazier-Foley’s long titles set up and inform the body of the poems. None of the four related poems in this sequence share a form, using couplets, triplets, and other arrangements of lines to stress the fact that four distinct individuals, not a single entity with a shared consciousness, participated in this group action. Consequently, it is one of the most thoughtful poem groups and perhaps the strongest.

Another sequence pertaining to photographer Diane Arbus does not succeed as well. It reads as one long poem split randomly into sections and sprinkled throughout a larger work. Because each portion features the same format, and because the segments seem to randomly halt amid erratic line breaks, the titles more than anything indicate that each piece fits with the next. Without them, they feel as if somebody had been interrupted mid-thought, lost the thread of conversation, and moved on to a new topic. Because the ends seem to dangle, there’s a lot of page-flipping whenever one arises. As soon as readers realize the thought that was disrupted before continues later, and the line they are reading now only makes sense when they refer back to the earlier piece, the reading experience itself also feels disrupted. Did Frazier-Foley intend to prevent a smooth experience? Is this a form of delayed gratification, a la David Foster Wallace and his constant disruption of the narrative with end notes full of necessary information? Perhaps, but if so, it’s not immediately clear. Yes, there are notes at the end, but they don’t really help until it’s almost too late.

Somewhere between the two falls a seemingly self-mythologizing arc, whose titles refer to a fox-haired girl, and the eponymous “Exodus in X Minor” poems. These involve psychic mediums, past lives, classical symbolism, delightful water imagery, and violence – questioning who owns violence, who is responsible for it, and who answers to the victims. Sometimes the narrative in these is strong; other times, the careful building of moments and images takes the fore. Although there’s some linguistic obstruction (one portion contains English, French, Haitian Kreyol, and Louisiana Kreyol), readers will enjoy lovely turns of phrase like “our lungs learning dirt” and the unexpected beauty of works like “esurient” and “lakeful.” Again, it’s not immediately clear whether such impediments serve a calculated purpose, but in these sections, it matters less. Even the portions that will end up as guesswork to many readers feel good in the mouth, and these poems link together nicely while working as equally fine stand-alone pieces.

Also of note is the marvelous way form and function relate here. Frazier-Foley references knitting woolen sweaters fairly early in the text. While “modernist” doesn’t really fit these poems, the fact that the structure of the book takes the form of an item explicitly mentioned within the text makes it not just an act of convenient sequencing but a unifying element. Characters, places, concepts, and images weave in and out of these pieces, disappearing and reemerging to form something larger much like the warp and weft of a singular garment.

If ever readers feel lost in this book, they must simply refer back to this sweater and follow its cables. Listen to the clicking of needles as they bob over the fabric like a boat on the sea. These waves bring the necessary words to shore.

Betty Scott lives near Chicago. Her reviews have appeared on Bookslut and Books and Whatnot. Her fiction and poetry have been featured in publications such as Untoward, The Wax Paper, and Slipstream.