Some summers the hotel was closed due to insufficient water. So the Glacier Point Hotel and McCauley’s old Mountain House, like the famous Firefall, became only memories.

History says that a man stood at the bottom of a cascade and, as a signal, intoned: Let the fire fall. As if this could be done by mere hands; exposure to the elements teaches even the noblest skeptic that fire burns through everything given enough time. Anything can become historical; all it must do is stop. History says—and History is always saying something—an entrepreneur built a hotel on top of a mountain that History, decades later, would call a park. There were bonfires, and when those died down, the tradition of boys kicking flames over a cliff became a sensation that people would pay to experience. History says the park caught up with the spectacle, disallowed it, called it a fraud, unnatural. The rangers must not have seen it with their eyes, must have heard rather than known the splendor of it. When the last fire fell, it was snowy, and no one was there as witness. No one to tell the fire what to do, no lenses to capture, even momentarily, the weight of what can be, still falling. 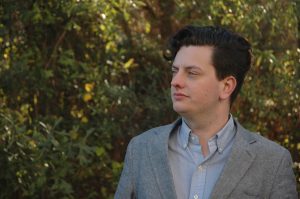 Todd Osborne holds an MFA in poetry from Oklahoma State University, and he is currently pursuing a PhD at the University of Southern Mississippi’s Center for Writers. His poetry has appeared or is forthcoming at The Missouri Review, Big Muddy, decomP magazinE, Juked and elsewhere.