Antonovsky suggests, as Freud did, that psychological illness
is born of narrative incoherence, a life story veering off course.
—RACHEL AVIV, The New Yorker, April 2017

One time I spent the whole session balloon-lettering FUCK YOU onto a yellow legal pad. I had been mum for weeks, and the men in the room were rapt. She’s writing us a message, one said. And boy, was I ever. The dust motes haloed my head while I scrawled my holy writ. Another time Mama slipped a tape recorder into my pocket. It’s not fair she said, showing me how to use it, two big men ganging up on a little girl. I had, of course, used it before to record the dumb story of my young life. I could feel it in my pocket during those long weeks, heavy as Daddy’s big textbooks. At night I’d creep from bed and scan the words for broken: aphasia, agnosia, amnesia. Afterwards she’d listen to every word, cluck her tongue, and wind the tape back up into a waiting asp. These were the days when I still knew every part of the story. They met, they had me, we were we. One time I spent the whole session with my eyes closed. I saw dangerous weather-map hues though my hands weren’t pressing my lids. I never knew whether I was well or ill, dreamed of being bedridden like Beth, Jo helping her die in that novel. We were not sick but simple, believed there were still threads tying us, still more rungs on a ladder that would lift us. The last time I ran from the musty office and leapt on the hood of his Yukon. I clambered to its pollen-dusted roof and sat there, took root like a lotus: my tendrils searching the depths. I had no plan other than make it stop. Those two big men stood there dumbstruck, in awe of me. I think she’s trying to make a statement, one said. She looks like a martyr, said the other. One of those men was a doctor. One of those men was my father. 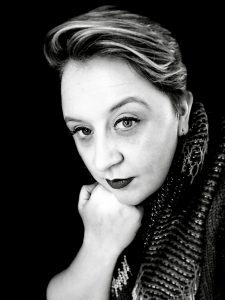 Caitlin Cowan is a graduate of the PhD program at The University of North Texas. She has been the recipient of the Littoral Press Poetry Prize, the Mississippi Review Prize, and an Avery Hopwood Award. Her poem, “Flight Plan,” won the Fugue Poetry Prize judged by Ilya Kaminsky. Her work has appeared or is forthcoming in journals such as Pleiades, Gulf Coast, Tinderbox Poetry Journal, Boxcar Poetry Review, SmokeLong Quarterly, Entropy, and elsewhere. She currently works as the Director of International Tours at Blue Lake Fine Arts Camp. You can find her at caitlincowan.com.