i could buy these reading cups: now
worth between 3,000 and 5,000 francs. i’d go
to galleries in algeria or tunisia, i’d have
them removed from the cabinets in the
museums, from beneath the dust, i’d make
the transaction, they could belong to me
then and there. i even thought of buying
them with the money i would make from
this poem. i even thought of including them
in this poem, but as i progress, they become
more distant, and who needs reading cups
when there is a poem to be read. i mean, written.
the cups once bought would lose value like most of life
a diminishing return or rather, latent; ghost.

about #05661
refugee #05661 arrived at the island of Algiers when she was 12-years-old and lived during a time of great poverty in the southern united states of america where she contracted a rare autoimmune disease. this is when she turned to poetry for comfort. she became an established poet late in life, publishing two volumes of poetry after 55 years of working as a healer and medium, helping connect those who had been estranged from their family members in the great refugee crisis of 2016-2200. her work centered on ancestral memories, the energy that lives within objects and the psychic space between colony and place of origin. it is also worth noting that she never used her government name and instead chose to use the last five numbers of her refugee id card. based in a belief that life mimics language, she also refused to use the colonizers’ hierarchy of capital and lowercase letters, insisting that all letters be equal once stating, “in my mothertongue the letters are connected, the way the letters stand in this language is a way of disconnection i am not interested in.”

translator’s note
#05661’s work was necessary to the refugees who found themselves on the island of Algiers in the southern united states. she never believed it was a coincidence that she had landed on an island by the same name as that of her ancestors. in her final remarks to her class at twolane university she said, “their vision followed me as i have followed their guidance in waking, in knowing and unknowing, in dreams, and in responsibility.” by way of honoring her aesthetic, the translator has chosen to write about #05661’s work using the same devices of language she applied. 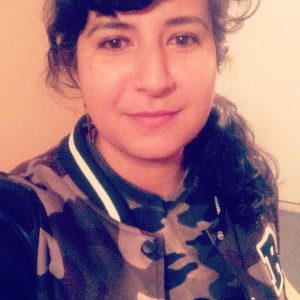 Born in Al Mansurah, Egypt, and currently residing in Brooklyn, New York, Marwa Helal is the winner of BOMB Magazine’s 2016 Poetry Prize. Her poetry, essays and journalism have been published in Apogee, The Offing, Winter Tangerine, Poets & Writers, the American Book Review and elsewhere. She is a Cave Canem Fellow and received her MFA in Creative Writing from The New School.