I am that woman in your book club who, when everyone’s

laughing at a certain passage, has to point out that the metaphor

also contains an intimation of death.  And I’m that mother, who

what’s a blow job? doesn’t even pause, just launches into

a few accurate details. At a party someone told a joke

about a merkin, then squinted one eye at me, You know what

a merkin is, right?  Scout’s honor, I answered As opposed to Canadian?

shaped like a vagina—the guide said entrance to the womb,

but come on, I wouldn’t even let my daughter’s boyfriend

get away with skirting the V-word, which froze him in place

under the kitchen fan, forkful of spaghetti halfway to his mouth.

all stone slabs in bas-relief that had held itself together

for 5,000 years. We crouched low, tucked our cameras tight

against our chests. If you get claustrophobic, go in last.

It was dry and stuffy in there, but nose to butt, we inched

the length, a line of pale elephants in sensible shoes.

One guy, thighs and belly of an aging linebacker, got stuck

Winnie-the-Pooh style, with his shoulders banging hard against

the tilted stones, until finally he popped through to breathe

quietly in the corbelled vault at the center of the mound

where the cremated ashes of our ancestors were laid

in what looked like large stone bassinets, beneath the spirals

dots and chevrons they had carved in the stone ceiling

like night sky on acid.  Lights out —We stood together,

sightless as miners trapped beneath the ground, until someone

flicked a switch and a riffle of weak light entered, crept slowly

down that tunnel, like a winter solstice sunrise beam,

to edge our sneakered feet with gold. Did I say tunnel? 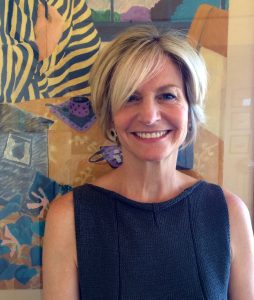 Veronica Kornberg is a poet based in the town of Pescadero, on the Central Coast of California. Her poems have appeared or are forthcoming in Valparaiso Poetry Review, Tinderbox Poetry Journal, Catamaran Literary Reader, Redactions: Poetry and Poetics, New Millennium Writings, and Negative Capability. She is currently at work on her first book of poems.