“According to Inuit culture in Greenland, a person possesses six or seven souls.

The souls take the form of tiny people scattered throughout the body.”

flexing his biceps and Down there he adds She skis Greenland

flew straight into a glass door that shattered

blue muscle fell out steaming into the cup of his

Michael who came out and was disowned by his family

I think as the Norwegian leans in his muscles safely contained 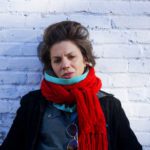