The man was there,
and not, slaughtered for taking.
Someone said suicide with much riddle
of the tongue as if asking
why here? Why downtown Seattle
where the sun beads down each scrapper
like a raindrop or early morning dew?

The flux of the city was comforting
that afternoon, I remember.
The Starbucks was closed.
Chase bank, too.
I watched police cars thicket,
watched the ambulance sift through traffic.
What could remain of him?
Him, another falling man.
But his body found
and hideous on both ends,
sopped in his own blood.

Someone from work said better here
than Suicide Bridge over in Aurora
as I slipped between the pulsing crowd.
I ached to find myself
inside the splash, go rolling in it.
The steamed gush rifled
and the red, red of him flared
my eyes wide, pretty, while the bust of sirens
stabbed and the ill-rotting guts grew
ginormous in its walk, washed
me stunned as I tasted the flavor.

I was floored by the flight: the man leaping
from the roof like a bird trusting its wings
for the first time.
Like a shirt thrown out the window, thrashing
its thread and cotton for the wind—a dance
so familiar the breeze would take the cuffs
and twirl twice before leaving.
Gentlemen-like.

During lunch, I ran outside into the after-
scene. The thicket shriveled.
The traffic barely combed the streets.
I looked to the sky. It was Pacific blue, blue
enough an orca whale could swim in its deep
without stress. The twinkle of sunbeams
serving as waves crashing on the banks
of the mountain range horizon.

I was glad. Not because death promised
arousal: how I shook with thirst: the image painting
me hypnotized. 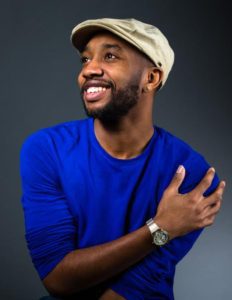 Luther Hughes is a Seattle native and author of Touched (Sibling Rivalry Press, 2018). He is the Founder/Editor-in-Chief of the Shade Journal and Associate Poetry Editor for The Offing. A Windy City Times Chicago: 30 Under 30 Honoree, his work has been published or is forthcoming in Columbia Poetry Review, Vinyl, BOAAT, Adroit, and others. Luther is currently an MFA candidate in the Writing Program at Washington University in St. Louis. You can follow him on Twitter @lutherxhughes. He thinks you are beautiful.