Our charts said “they feel radiant in each other’s company,” and it was true until I drove nine hours into another life. The officer that pulled me over didn’t question the tears that had been washing what remained of your body from mine. It was the hardest thing I’ve ever done, but I stepped on the pedal and didn’t turn the wheel.

Under gray simulations of clouds, the forest was close and alive with your voice. The whole of the world came with it as I seeped into the green, while somewhere nearby another life wasn’t leaping forward, wasn’t beginning. The only way out seemed through the little red light on my cell phone, the ghost of a ghost. The presence of someone not. Blue rain fell and fell on a steel roof like some cosmic background noise, a drowning and resurrection. We only wanted sohbet.

I was two people; one of us had to die.

Nine hours and nine years later, my son is proof that the world is infinite. He is my fearless devotion to God’s will. He eats the cherries from our tree after I carefully remove the pits. He loves trains.

You are a photographer, and now you are an image. The sun leaping overhead is my sun, and impossibly it keeps setting, every descent a truism that things can change in time. They do. They always do, even though somewhere in our school’s garden a brick is poised in mute dedication, awaiting the only step that matters. The physicists say time is an illusion.

If so, this isn’t silence. This isn’t until further notice. This isn’t someday. This is just another me, still standing in the street, you on the curb, our hands entwined in the love of love, the Sun never setting. 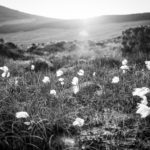 Seth T. Miller lives in Portland, OR and is currently Lead IT Systems Specialist for a global manufacturing company. He has a Master's degree in Consciousness Studies from JFKU University and a PhD in Transformative Studies from The California Institute of Integral Studies. Somehow he is in the top 3% at Academia.edu. Essays, poems, and other writings of his are available at his website: http://spiritalchemy.com.