That night, a high wind whipped grit at our windows, drowned

the radio. When Daddy’s eyes rolled out of his sockets,

he caught one in the notched cup of his palm.

Mama chased the other through our battened shack, wrestled

it away from our thin-boned cat. These things happen:

twisters split the roots of our foundation, rust tatters

the edges of our spoons, the bell of every bowl is weighted

with dust. When she offered him his eye, smut-black and oozing,

he closed the other into her hand and said, cook ‘em.

The next day, Daddy woke with spiders nesting

where his eyes used to be. He cleared the cobwebs

thimbles. When they cooled to balls, he told me to paint them

blue, like he always wanted. They didn’t plug the holes

quite right, one false eye lolling like our back door, loosed

from half its hinges. Metal leaked into his blood.

Now, his tongue’s feathered with rust. He spits pennies

instead of tobacco. He and Mama don’t talk. All night,

we hear him scraping his teeth against the wet smile of his axe.

and his breath reddens even the dust. He still sees me

a little, but I don’t think he sees Mama anymore.

She fixes him lunches of screws and banjo strings.

He never thanks her. Once, I saw her juice a plum

into the bowl, rust shut his jaw. When I oiled it open,

he dropped all Mama’s needles down his throat and said

he’d spit them back at her, said he’d aim for the eyes.

When the next storm seethed through, she shoved him

into the rain and jimmied open his chest, found a cluster

of dynamite where his heart should be.

I watched from behind the kitchen door. She said,

I’ve had enough, and cut the bundle loose with her last

pair of sewing scissors. He took it out into the barn,

his heart in one hand, his axe in the other.

The day he left, Daddy twisted a nut

around each of my fingers. Now your hands

will shine. I think that once, they were pieces

of his heart. That night, I shrieked awake:

steel girdled my skin, all that shine swallowed up

in blood, metal rings notched snug under my knuckles.

When Mama came, it was too late

to cut them out, too late to do anything

but rock her hands over mine and teach me

how to bind my split-up fingers into fists. 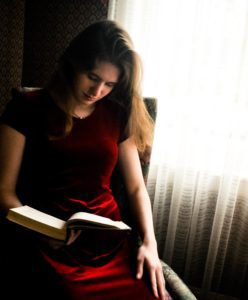 Emily Rose Cole is a writer and lyricist from Pennsylvania. She has received awards from Jabberwock Review, Ruminate Magazine, and the Academy of American Poets, and her poetry has appeared or is forthcoming in Nimrod, Spoon River Poetry Review, Yemassee, and Passages North, among others. She holds an MFA from Southern Illinois University Carbondale and is currently a PhD student at the University of Cincinnati. You can reach her via her website at emilyrosecolepoetry.com.