On the stalled train, I think of the exclamation mark,
its Latin origin—so I have read—from the expression for joy, io,
which Medieval copyists jotted at the end of sentences
to signify triumph, cheer, delight, hurray,
which over time others decided to stack the i over the o,
which the 15th century printing press stamped, note of admiration,
which 1970 typewriters finally came with its own key for it,
but besides this I know nothing else of its history;
there is just my own wonder over how one begins to create a visual
that encases it: the trademark equivalent of a heart shriek,
the character form of the eager bounce in a heartbeat;
it seems arbitrary to fasten two letters and claim this a sign for emphasis;
on the stalled E train after midnight, he nods in exhaustion,
half asleep, he appears older when he is this tired, like a new father—
I daydream—in those first weeks tending to his newborn,
and when fatigue finally takes him, he slumps, stretches
on the empty seats to the right of him, his face drops into my lap,
I arrange my thigh for his pillow, and glance at his body,
and it is suddenly obvious—his legs unfolded, his torso un-crooked,
his neck unbent, all of him drawn straight like a line, stacked
against his head in my hands, like a circle filled in, and at once,
from this angle, both the image itself and the inspiration—a symbol for joy 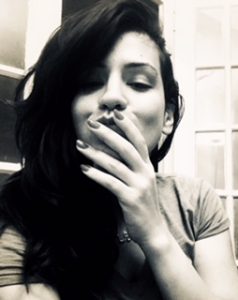 Mehrnoosh Torbatnejad is the daughter of Irooni immigrants, a worshipper of space and hyacinths, and an Oscar the Grouch apologist. Her poetry has appeared in Asian American Writers’ Workshop, The Missing Slate and is forthcoming in Waxwing. She is the poetry editor for Noble / Gas Qtrly, and a Best of the Net, Pushchart Prize and Best New Poets nominee. She lives in New York where she practices matrimonial law.