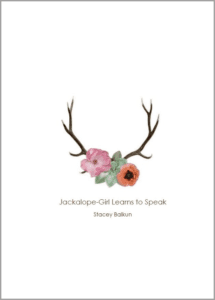 Stacey Balkun’s startling and surreal debut chapbook, Jackalope-Girl Learns to Speak, recalls the work of celebrated contemporary domestic fabulist poets like Jeannine Hall Gailey, Anna Journey, and Ki Russell. Herself the co-editor of a collection of domestic fabulist poetry, Balkun writes in the Mockingheart Review that the real world can be made new when injected “with an element of myth, magic, or fantasy… [opening] up new possibility for imagery and metaphor.”  Indeed, in this collection, Balkun has chosen to insert a monstrous titular character — a Jackalope-Girl with antlers and rabbit teeth — into an everyday domestic world of twenty-four hour gas stations, brick-red barns, and muscle-relaxer plying dentists. The success of this premise is only partially due to the tension between such a strange character and such an ordinary world. What is even more interesting is that Balkun has chosen to use the Jackalope-Girl — so out-of-place, so uncomfortable and difficult — as a vehicle to explore the consequences of adoption and alienation in American families.

In the opening poem, Balkun imagines Jackalope-Girl born during an ice storm: “It was unusual/the cold front, the leporid wind scream./Nurses worried in the maternity ward…” She continues:

If the patients looked up, they would have seen
the last photographs of the new-dead flicker

across the screen with captions like tragic…
while frightened deer stilled in yards, antlers branching

toward the grayed sky. Gas stations and their 24/7 signs
stood, for the first time, un-glowing and nobody knew

to blame the jackalope-girl, newborn and hungry,
ears still unfurling, nesting in a stranger’s arms. (“Myth”)

The rest of the collection explores what follows from this premise in all its strangeness. Balkun spins a wonder-tale about Jackalope-Girl with poems that tell of pivotal moments in her life, using her story as an allegory to examine the consequences of not fitting in. In one poem, Jackalope-Girl begins by addressing the reader: “I was seventeen. I stopped shaving,” an opening line that leads the reader to think at first about the societal expectation that ordinary young women shave their legs and armpits. However, the following line reminds us who is speaking; what Jackalope-Girl has decided to stop shaving is not her legs or armpits but something else:

I was seventeen. I stopped shaving

my antlers, wore whatever I wanted

and hung out with the smokers
even though I didn’t smoke. They liked me…

Here and elsewhere in the collection, Balkun plays with reader expectations about wildness and civilization. How wild we are, that we must shave our bodies in order to appear civilized. And although Jackalope-Girl is obviously wilder than we are by definition, at times, she appears so very civilized and relatable. Isn’t it a nearly universal part of the high school experience for teenagers to hang out with groups that they don’t entirely fit into, simply because those groups accept them? And don’t all children—both adoptive and those raised by their birth parents— also experience some level of this alienation and insecurity?

What is most impressive about this collection is how Balkun builds two narratives simultaneously and in such a short space. Jackalope-Girl Learns to Speak is at once a wonder-tale about a mythic character forced to live in a world into which she does not fit, and an allegory about adoption and the more constricting elements of family and community. This is true even in the cryptic Antler-Girl poems interspersed throughout the collection, which explore the perspective of Jackalope-Girl’s birthmother through the lens of religion. In “Antler-Girl as Eve,” Jackalope-Girl’s birthmother casts herself as the first woman and mother, saying: “The Bible didn’t tell you/about my antlers.” She laments that when she gave birth, she wanted her daughter to be “electric/free from this old gospel.” Indeed, readers of this collection will be forced to confront the alienation of their own adolescence, and the way their desire for freedom from that alienation led them to create families and myths of their own.

Mary McMyne is the author of the poetry chapbook, Wolf Skin (Dancing Girl Press, 2014), winner of the Elgin Chapbook Award. She is the recipient of the Faulkner-Wisdom Prize for a Novel-in-Progress and a Sustainable Arts Foundation Promise Award, among other honors. Her poems, essays, and stories are forthcoming or have appeared in journals such as Gulf Coast, Southern Humanities Review, and Word Riot. Her reviews have appeared in American Book Review and Verse. Learn more at marymcmyne.com.