She said the ball of light entered her room and saved her life. She held it in her palm & let it dance. I said, when I was twelve, I captured fireflies in a jar only for the moment when their lights exhausted. Evelyn Lau said, when light shattered across the floor, & briefly, there was a thunder between us. By us, she meant me & my brother. When she said, hands stood shaped like shelters, I wanted it to be my own failures she described. Morrissey said there is a light that never goes out. John said an incoherent buzz, the flickering light in his bathroom, stopped him from pulling the trigger. I said, the light was a jellyfish with teeth, light was the gold piss after the sting. When the lord said, let there be light, it was hilarity in bright pause. 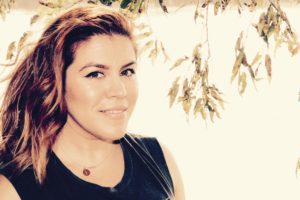 Iliana Rocha earned her PhD in English Literature and Creative Writing from Western Michigan University. Her work has been featured in the Best New Poets 2014 anthology, as well as Bennington Review, Blackbird, and West Branch. Karankawa, her debut collection, won the 2014 AWP Donald Hall Prize for Poetry and is available through the University of Pittsburgh Press. She is currently an Assistant Professor of Creative Writing at the University of Central Oklahoma and lives with her two chihuahuas Nilla and Beans.