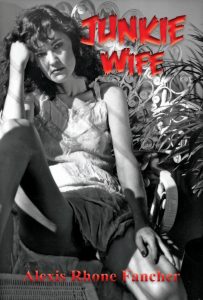 it’s all cake once I’ve found a good vein.
i surrender to the dazzling foreplay
loosen the belt, ease back to the plunger
watch my blood flood the syringe.
the gasp, the breath-catch just before I jam
the plunger down, just like
you plunge into me (my cheeks flush)
and the rush? the ride? the afterglow?
better than sex, correction:
better than sex with you (I mean).

(“Why I Prefer Injectable Narcotics”)


Raw, honest, and feminist are all good captions for the poems in Alexis Rhone Fancher’s new chapbook Junkie Wife. These poems tell a story (and maybe a cautionary tale) about the sex-and-drugs lifestyle—and it’s a “truth that impales” (“Why I Prefer Injectable Narcotics”). The poems focus on the rise and fall of the speaker’s first marriage during which she was addicted to shooting opiates. The storyline in Junkie Wife is dreadful, but it’s also moving and funny in the way Shakespeare’s gravedigger scene (in Hamlet) is moving and funny—very ironic and very noir.

The story of the addict-wife in Junkie Wife is archetypical, a post-modern Los Angeles fairy tale. The trajectory of the speaker’s marriage—from the couple’s beginning as “fierce lovers” to the end when “’Shoot me up,’ he’d plead”—is both chilling and poignant (“Flirting with Death—A Love Poem”). And Rhone Fancher doesn’t hold back describing the gory or, sometimes, sexy details.

The speaker comments, “I am addicted to bad men, sex, and opiates. I wrongly thought my husband was addicted to me” (“Folie à Trois”). At the beginning of their partnership, he appeared to function well in his role as drug addict’s enabler. On the other hand, he needed for the speaker to be tied up, motionless, in order to function sexually (“Once More, Ronnie Said, for Old Times Sake”). Turns out, he was betraying her—he was having an affair with the speaker’s best friend. Matter-of-fact, the speaker says:

Her husband ‘s initial enthusiasm for his junkie wife cooled; he was heard to complain, “[M]arriage to a junkie is not / what it’s cracked up to be” (“Folie à Trois”). After hooking up with the speaker’s friend, he ended the marriage by kicking the speaker out of her home and moving the friend in, complaining: “Please, just leave us alone” (“Chance Encounter”). The setting—Los Angeles in the fast lane—mirrors the grittiness of the story’s plot. The speaker’s vision of Tinsel Town is grim. It is a place where people use each other rather than love, where everybody has a past they’re running away from, and where life is cheap.

In Hollywood the streets talk trash, hold murder
in their asphalt, blood in the potholes,
used hypodermics float in the gutters, rats
dance on the lawns.


As I read and react to these narrative poems, I come to the conclusion that Alexis Rhone Fancher is one of the best poet-storytellers out there. There are so many good stories in Junkie Wife, I can’t possibly comment on them all. Nobody spins the turn in the poem, the big or little twist at the end, better than Rhone Fancher does. For example, after writing a list for the reader in “Things I Put in My Mouth,” a list that includes:

a butterfly
an admission
three lies

the speaker adds at the end: “I’d almost forgotten // your cock…”


Rhone Fancher is to be commended for not bending under the weight of readers’ expectations about drugs and drug addicts. The poems in Junkie Wife are enormously relatable and accessible, drawing the reader into a drug addict’s real world. The poems sound like a friend talking—a friend who uses earthy language, and that may be the secret of Alexis Rhone Fancher’s charm. She makes it easy for us to emotionally connect with the speaker’s feelings and actions and to understand what is going on. And in this case, “to understand all is to forgive all” (at least according to a French proverb sometimes attributed to Madame de Staël).

The poems in this chapbook are usually brief, but it is a brevity born of clarity. Despite the poems’ shortness, Rhone Fancher regularly supplies just the right imagery needed for a clear and honest look at the speaker, her pain, and her environment. For example, a lot of the impact of the following language depends upon its imagery:

In the spill of the porch lamp the girl looks fourteen,
cowering in the courtyard of this windy night,
cheap stilettos stemming her pale legs up into tiny shorts.

Two men the size of refrigerators
slap her face like she’s meat that needs
tenderizing. One stands behind her, pins her arms;
the other brute yells in her face:
“You will fuck who I say, when I say!”


It has been said (by poet Jenn Givhan) that Alexis Rhone Fancher uses her photographer’s eye to process reality into poetry (it should be noted that Rhone Fancher is also a professional photographer). This fine eye, the compelling material in Junkie Wife, and Rhone Fancher’s skills as a poet result in a book that kept me practically spellbound.

This is Alexis Rhone Fancher’s fourth poetry book. She’s always had a cult following, but these last few years have seen her considerable reputation go mainstream. I predict that Alexis Rhone Fancher’s poetry, popular now, is going to “go viral” and become wildly popular on a national level sometime soon. To readers who like their stories real, maybe a little bit noir, who appreciate flecks of ironic humor in their poetry diets, or who just dig good writing, I’d like to offer this advice from Janis Joplin (that I think the speaker in Junkie Wife would approve of): “Get it while you can.” This book is hot.