She whispers “bastard” in my ear, her hands cupped tight,

and this one feels hollow, blank, but when mom says

“That’s not a nice name to call someone,” I know it’s a bad one,

it’s got weight. I keep it in my pocket for later when a boy

snakes his hand up my dress. For when a man presses too close

in the elevator. Say it in someone’s dark garage in high school.

Say it in the basement of the library. Say it to my husband.

Angelina has had it in her pocket a long time: embedded

in her hip bone, a quick-draw curse for her father,

her brother, her brother’s friends, her friend’s brothers,

and the men who blew up the hair salon

where her best friend sat, spinning in a chair,

Later, after the world has lifted its skirt to me and bared

its dark weapons, I will see a photo of her and her daughter.

She is still a baby, toothless and clean, and words slip

off her skin smooth as milk. She may never need to say it.

But for now, we will say the word over and over.

where the night falls down around us like so much 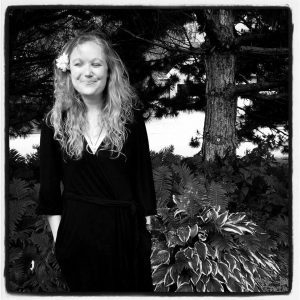 Alysse Kathleen McCanna is pursuing her PhD in English at Oklahoma State University. She is the Associate Editor of Pilgrimage Magazine and received her MFA in Writing and Literature from Bennington College in 2015. Her work has appeared in or is forthcoming from poets.org, Lunch Ticket, Barrow Street, Boulevard, and other journals.