His legs then, a clock too fast, too easy in telling me
how small the space we take up, how far we manage

to wander off still. Any time away from home is too long.
Pomona has changed—is now a man asking if I want to buy

his MP3 player. He raises an earbud for me to listen,
tells me no one believes him, but he doesn’t say about what;

it’s how they say yes, but don’t look. I only nod. Despite me,
he talks about his daughter who works at AutoZone and is

the manager now—the jefe. But his son, who I’m certain
I went to school with, who walked into 5th grade one morning

with his eyebrows shaved and sat down without saying a word,
who never spoke to anyone ever again, he does not mention.

Not even once. Where have all my classmates gone?
Where I grew up has nowhere to live, but he says

for cutting her grass. And have I seen a Bible around?
No one’s going to pick it up, he says, not unless it had

a hundred dollars in it—that would be something,
wouldn’t it? He’s nodding, he’s balancing himself

on the bike. He’s trying to leave, but will I be here
tomorrow? He might be around; my town is always around.

So how about that MP3? I can keep it if I want—no,
how about for ten bucks? My town is presenting

like a Ferris Wheel no one wants to ride, that stays
spinning beside the operator who calls us to step on up,

scooping cups of air, one handful at a time. 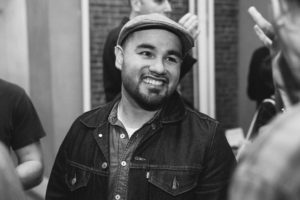 Michael Torres is a CantoMundo fellow, born and brought up in Pomona, California where he spent his adolescence as a graffiti artist. His work has appeared or is forthcoming in Huizache, Green Mountains Review, and Forkilft, Ohio among others. He has been awarded grants from the Minnesota State Arts Board and the Jerome Foundation. Torres is a 2016-17 winner of the Loft Mentor Series. Currently, he resides in Mankato, Minnesota where he teaches creative writing and hosts art workshops for homeless youth at the Reach drop-in center through Good Thunder Reading Series Community Outreach.