my teen answers, when asked what he learned

at school today. Different from the nothing the pathology

report showed and still different than

when my wife is angry and says absolutely nothing

for three days. And if I take her hand she just looks at me,

lips locked. Which is not exactly like the high-schooler’s

The label on the box that says 100% Juice

because they left out the bad stuff they normally

pour in. The screeches from my daughter

when she confesses to her mother she let a girl

touch her there but she felt nothing, which she

hopes makes her a good girl. This is not the same

as when your parents call a third time from their dark

apartment and ask what’s new since three hours ago

and because you are a good son, you tell them,

again, the temperature, what you ate, the TV show

you’re planning to watch; and you are either afraid

to return the question, because no news is good news,

or you do ask and hear only the wheezes, coughs—

the nothing that leads to a cross country plane ticket.

Looking out the window on the red-eye, after a second drink,

you know there’s something out there. Forgetting

you finished the drink, your hand brings the plastic cup

to your mouth and somehow there is a little left, a sip. 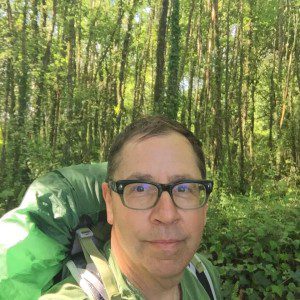