I coveted your spine. That glossy brown topography of darting muscles and sinew, a string of bone-pearls keeping you erect. I believed it: a good fight is better than a good man.

It was Oklahoma. I was seven, my heart was broken, and you were the most beautiful woman I’d ever seen. O god, the bruises, bodies flung against ring ropes, a man named Hunter to love. I loved you best all rewilding: hooker-red lipstick, waxed thighs, black leather for miles.

The women I knew feared the fist; not you. When your action figure came out, I bought two. I made your plastic legs part. Seven became ten became twenty-two. What I mean is I drank and snorted. What I mean is I tore bread so the birds would come. I watched your sex tape to see if you’d cry. I wanted to see the secrets of a woman who had none.

You dove into a fish tank once, after too many cocktails. You had to be yanked out. They called it lunacy but I know you did it for the slow resurface, black hair plastered wetly against bare breasts. The great fall of, screamed the headline. A woman can spend a lifetime wiping a man from her thighs.

Chyna, I went for a run yesterday and realized it was spring already, the trees shaking their Marie Antoinette wigs into a savage green. The fog lifted as I ran; the world brightens with or without us. Here’s life. Myths that scuttle into nothing like arks breaking the sea. The Victorians had it right: a woman needs a world that makes her small. But you already knew that, didn’t you. 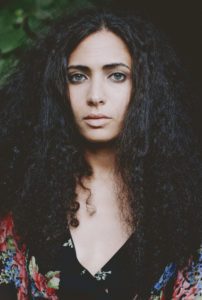 Hala Alyan is a Palestinian American writer and clinical psychologist whose work has appeared in Guernica and other literary journals. Her poetry collection ATRIUM was awarded the 2013 Arab American Book Award in Poetry, while her latest collection, HIJRA, was selected as a winner of the 2015 Crab Orchard Series in Poetry and published by Southern Illinois University Press. Her debut novel, SALT HOUSES, is forthcoming by Houghton Mifflin Harcourt in 2017. She resides in Brooklyn.