1. Memory is a mean drunk, always throwing her glass at the wrong targets. The language is not the problem. The problem, of course, is men & the things that remind me of them. I want to read Pizarnik in a hammock so loud the neighbors think I’m on something. I want her all over my tongue, my throat, my teeth.
2. How many pearls, how many laurels does it take to redecorate the past? Cheers to a doctorate in distancing. Cheers to how alone Texas stretches, the endless bright sky.
3. I learned this word in the first book of short stories I loved, The House on Mango Street, which Cisneros dedicates to Las Mujeres. I was fifteen & hadn’t been raped yet. Just a scrawny little white girl, but I knew Cisneros knew something about me, about how afraid I was of lemon heels & grown men who watched my legs too long & called me names that weren’t mine—Hey Buttercup, Hey Princess, Hey Babe.
4. What would this story be without an Eve to blame?
5. It does not say how the white American players were able to afford Hummers & Escalades, but they did. & the players from the DR & Venezuela all lived on chicken & rice & were very lonely stacked on top of each other by the invisible hand of capitalism. The first time I saw the room full air mattresses I thought, Slaveship. I thought, For what have you voyaged? I thought, Oh God. Oh God. Oh God.
6. But sometimes it was sweet. The men called each other Primo & raised Bud Lite cans toward the drop ceiling & spoke too fast for my gringa ears.
7. Maybe that’s not fair. Maybe we’ve all been too drunk. Let’s try a revision. Let’s say he gets so drunk he shouts Neruda: Solamente es un soplo, más húmedo que el llanto, /un líquido, un sudor, un aceite sin nombre. Let’s say I couldn’t translate the beauty. Let’s say I still can’t.
8 Weeks after, when I dipped the tampon in hydrogen peroxide to sting myself clean & raw, was that a spell?
9. It fails to mention that I named it Esperanza. 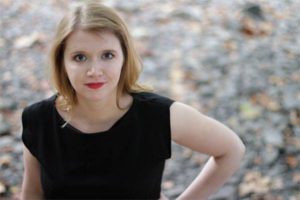 Stevie Edwards is the founder and editor-in-chief of Muzzle Magazine and senior editor in book development at YesYes Books. Her first book, Good Grief (Write Bloody, 2012), received the Independent Publisher Book Awards Bronze in Poetry and the Devil’s Kitchen Reading Award from Southern Illinois University, Carbondale. Her second book, Humanly, was released in 2015 by Small Doggies Press, and her chapbook, Sadness Workshop, is forthcoming from Button Poetry in January 2018. She has an M.F.A. in poetry from Cornell University and is a Ph.D. candidate in creative writing at University of North Texas. Her poetry is published and forthcoming in Indiana Review, Crazyhorse, TriQuarterly, Redivider, 32 Poems, The Journal, Rattle, Verse Daily, Pleiades, Ninth Letter, and elsewhere.