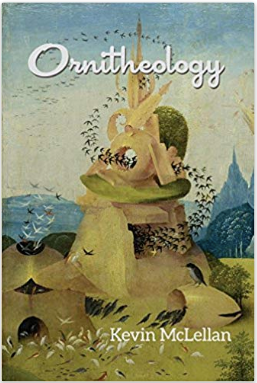 Kevin McLellan begins his second book of poetry, Ornitheology (The Word Works, 2018) by speaking to the reader between the sounds of a furious leaf-storm. “In Between the Leaves Dropping” is a fragmented story of two near-deaths: the speaker’s father and his brother. The leaves, which fall with such speed and force that they partially drown out the speaker’s voice, mimic the father’s fall from a ladder and the river’s undertow that threatens to suck down the brother before the poet saves him. The line “but he lived,” which could refer to either father or brother, implies a loss – a lasting injury, the sense of safety, or survivor’s guilt continuing into the present, creating “a collision of tenses.”

Ornitheology is a book of collisions and near-misses, danger and vulnerability. An older man throws a bicycle into the path of the speaker; a pedestrian hit by a car lies in the road caressing the bumper; a girl in yellow leggings crosses in front of a dump truck that nearly hits her. At the same time, it is a book of the interiority. The precision of the outer world’s descriptions are mirrored within the mind, where “two caged canaries/ attempt to not become/ anything other than mirrors.” McLellan, who teaches workshops on poems as events, creates little events everywhere, as when he doles out the following surprise:

I thought I saw myself

but it was a hat.

Yet, events are not just narrated in the poems – rather, the bodies of the poems themselves create events. The first poem signals that subsequent poems might have parts of their whole drowned out, torn off, or fragmented. In creating these fractures and erasures, McLellan’s tools include white space, slashes, colons, asterisks and brackets. What happens to the body of these poems echoes the bodies of the people within them who die, who fall, who go under the knife and emerge not quite whole.

In “On Being Well,” for example, the asterisks between each line suggest the labored breaths of a person whose lungs fill with fluid as he or she dies:

water: a secret in

the well: the well

your lungs: your breath

So much happens in this short poem that is at once full and spare, like Ornitheology itself: the middle line suggests a mirror, like a reflection in well water, or the symmetry of lungs themselves. Yet rope cannot pull the last words out of the bitter water of the flooded lungs. The poem tells itself both through words and punctuation, acting like a piece of visual art.

In the second of two poems titled “Portland,” the speaker visits an art opening after having a tumor removed, where he discovers that the painter also went through surgery:

see how it shaped

her red to orange

to yellow / for dinner

with an unbroken yolk

The repeated slashes suggest a visual representation of the surgeon’s cuts, just as the stanzas that alternate between one and two lines reflect the book’s obsession with mirrors, reflections, and symmetry (or lack thereof). It’s telling that the painter’s surgery made her red, orange, and yellow more potent, as they’re Ornitheology’s signature colors, often coinciding with health, wholeness, recovery, and vulnerability/disaster. In the subsequent poem, a paramedic bleaches a sidewalk free of a man’s blood, and a pet store clerk bearing scars on her arms from self-harm explains “sick birds/ tend to not act sick/ because it makes them// appear vulnerable.”

Whether to “act sick,” to show vulnerability in a world full of threat and danger are at the heart of Ornitheology’s concerns. The speaker’s willingness to be vulnerable, at least with us, the readers, gives the book a sad and beautiful intensity, even as its touch is often feather-light. I’ve never heard a better expression of alienation than McLellan’s “It is as if I am my own species.” Yet, the book insists on finding symmetry amid both exterior and interior danger. “Now in the mirror/ I mustn’t withdraw,” the speaker tells us in the last poem, which has one of the book’s most dramatic moments of white space:

] another kind of winter

for the eyes. Now in the mirror

Those of us who are very sensitive will recognize the feeling of overexposure, a world so bright it hurts and fades to white. McLellan shows, by looking closely, the relationship between this sensitivity and bravery. We, too, must find courage to look deeply inward, risking danger and overexposure, finding what symmetry we can.

Megan Alpert is the winner of an Orlando Prize for poetry and a finalist for the National Poetry Series for her manuscript The Animal at Your Side. Her work has appeared in Harvard Review, Sixth Finch, Denver Quarterly, Contrary, and others. Her journalism has been published by The Guardian, The Atlantic, and Foreign Policy. She received a reporting fellowship from the International Women's Media Foundation.