In Northern Ghana, she says, the Ga hold a naming ceremony

for every newborn, eight days after a mother gives birth at home.

It’s the first time the child sees the outside world, now limitless,

like an alligator emerging from a sewer, crawling out from the deep,

into the world, onto the street, its tail knocking down recycling bins,

awkward, like a curvy flyer with a small bladder in economy class,

backpack in the ATM line; or a bro spreading on the subway;

the eyes weak, blind, adjusting to light, to whatever this world

is on the other side of the pipe. Adinto: a debut, an “Outdooring.”

The Ga say the week after a baby is born, it isn’t yet human;

human thing, but a stranger, a visitor from beyond, a God

in the womb — and for a week, in the world. A foreign creature.

because the thing is an orphan without a name. It survives

in the sewer, in the deep indoors, empty in front of the beam

of the flashlight, beneath the world of the city — because birth

is like dying, expansive, the head in the shape of a balloon,

caught in a storm drain, circling, never having to exhale. 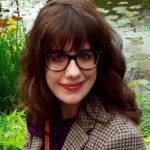 Jeanette Beebe is a Princeton, N.J.-based poet and freelance journalist. Born and raised in Iowa, she currently reports for WHYY-FM, the NPR member station in Philadelphia, and other outlets. Her poetry has recently appeared or is forthcoming in Crab Creek Review, Nat Brut, Rogue Agent, Side B, and Tinderbox Poetry Journal. She holds an A.B. in English with certificates in Creative Writing and Gender and Sexuality Studies from Princeton University. At Princeton, she wrote a book-length senior poetry thesis, co-edited Prism Magazine, and was awarded the Morris W. Croll Poetry Prize, the Emily Ebert Junior Prize, and the A. Scott Berg Fellowship. Her poem “Adopted” won first prize in the Iowa Poetry Association’s Lyrical Iowa competition.