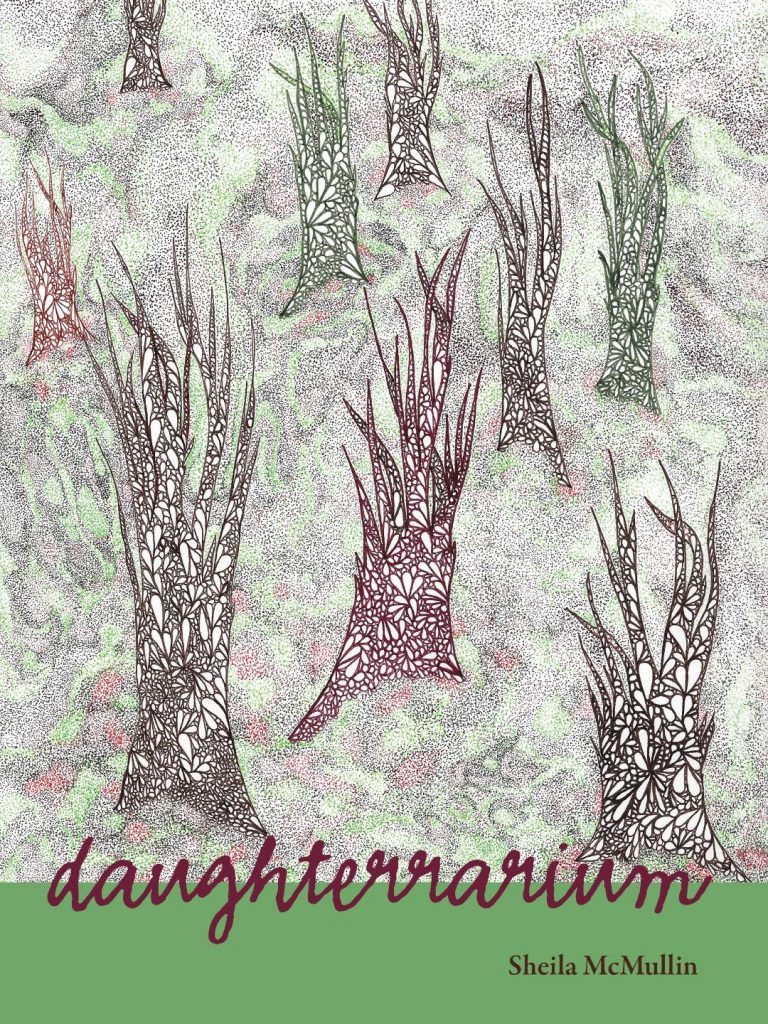 Check out the March issue of Tinderbox for Part 1 of this interview, in which Sheila McMullin interviews Kristi Carter.

Carter: Sheila, your book daughterrarium is so powerful. One thing that struck me over and over again as a feminist reader was the surge of frankness the speaker has and the necessary presence of that bluntness within the trajectory of balance that poetry calls for. Tell us what makes poetry such a fitting space for the themes and obsessions that make up daughterrarium.

McMullin: I don’t know if poetry was so much such a fitting space or the most accessible space it fit into. I know when I was writing daughterrarium the words came out in fragments and they came out flayed, and the work became to offer it for others to take in. Now that I’m a year removed from the poems being “finalized” in book form, I wonder if I would have been more revealing or tell all or something more muchness if the work was in prose, more linear? I sometimes wonder if I rely too much on the interpretations of readers to do the work of my poetry as a way to protect myself from having saying the things that have always been more difficult to say? But I also think the work of daughterrarium is still playing out within me…and while I wrote about things I’m ashamed of and things I feel sad for, I also tried to instill some hope. Maybe that’s why daughterrarium is poetry, because of the documenting of hope, which is a thing with feathers I hear.

Carter: In “Bad Woman, thought drawer variation” and “Ruth’s Book” doctors operate as voices of the patriarchy in blaming female patient-survivors although they are presumably there to assist them. This is a feature of medical intake that those involved in activism and advocacy for sexual trauma survivors are familiar with.  What kind of reactions has this poem, or poems in this trope, received in light of how that conversation is not often had in more mainstream public venues? What is it like to look back on this poem as an attempt to illustrate that component of these experiences?

McMullin: “Ruth’s Book” is part of an on-going project initiated by my mother, who is a medical and cultural anthropologist, when she first interviewed (pseudonym) Ruth as part of an ethnographic study on Latina health experiences in western medical institutions and cancer rates within the community. I remember hearing my mother recount Ruth’s story and the painangerfrustration of not being heard and then evaluated on preconceived notions and stereotypes. I am grateful to Ruth for sharing her experience, and specifically for one thing I did not include in the poem: The fact that she asked that doctor to leave and bring in someone else. I never knew you could do that. And she set an example for me. Back then, my mother, myself, and the incredible artist Kata Faust put together a zine of Ruth’s Book with ethnography, poetry, and art. Now, this story is being transformed into a larger graphic medicine comic.

From the handful of those who have ever said so, they either love or hate “thought drawer variation.” Seems like the folks who hate it wanted me to say something more explicit, something more like gossip, and for those who love it, it’s exactly for those same reasons that they do. I started writing “thought drawer variation” over 10 years ago. It contains over 10 years of my life. I worked and reworked it for 10 years. It helped me connect traumas in a way that started healing me. So, in mine eyes, it’s perfect…and the reception will always be what it is going to be and that’s also perfect.

Carter: Throughout the book there are repurposings of language and form that mirror the dissociative state of PTSD. For example, after a long section of meditative snippets in which the speaker attempts to puzzle together anger as an “untethering of shame” (57) a rejection of feeling ashamed, an agency in anger, a demand for others to confront her anger, the poem “Ruth’s Book” snaps the reader back into the very direct reality that women are blamed for their bodies and the dangers those bodies encounter (rape) or manifest (cancer/PTSD). Please speak a little about the way language and poetry can capture those elements described above dissociation and/or PTSD.

McMullin: Dissociation is about segmenting and poetry is about parsing. For me, I’m a heroic compartmentalizer. Code: nothing glorious about this. And poetry gives me that opportunity to just finally let my mind rest for one goddam moment and let the truth be that everything is existing all at once and feel safe by the size of paper which cannot hold the whole world. Here I can make my choices of what is left in and left out and start again to include what was left out and complicate what was left in. And then start again. Which, typing this out right now, doesn’t really seem like resting…but you know…moving through trauma often means replaying it until it stops holding so much power over you and you can begin to remold it in service of yourself.

Carter: Both of our books contain the specific position of the daughter as opposed to the mother. How does the daughter as speaker in daughterrarium function within the context of our usual presumptions about motherhood?

McMullin: Looking back on it, of course daughterhood would imply context of motherhood, but as I was writing daughterrarium, I wasn’t so much interested in that relationship of a daughter one day becoming a mother. I think I was more interested in the infantilization of daughters despite worldly experience and daughterhood being relationship not chosen, often mitigated, and exploited as a backdrop to sexual fantasy or maidship. “Daughter” was the first identity I ever had. I’m an only child. I moved through much of my life first and foremost as the child of my parents. I started digging into my own sense of self in my mid-20s and wanted to rethink what daughterhood meant to me. This collection was part of my way to explore multiplicity.

Carter: What is your experience with reception of the book in light of/as part of the growing conversation surrounding survivors of sexual trauma? Though the book came out before #MeToo and the literary community’s supportive reaction to that movement by continuing it in special issues dedicated to sexual survivors’ works, what was it like before/after this emphasis on survivor stories in the lit community? For example you write “I work toward an anger that moves forward/…You don’t have to support me/You have to get out of the way” (77).

McMullin: I’ve been fortunate and unfortunate to have been a part of many literary communities supporting and uplifting the stories of sexual trauma survivors through spaces like So to Speak, VIDA: Women in Literary Arts, and my own personal relationships before #MeToo. Fortunate for being surrounded by good people doing good work. Unfortunate that so many people have been hurt and abused. We’ve been doing the work of #MeToo and #TimesUp for years. I’m both empowered and disheartened by these social media moments. Empowered through the courageous and activating voices of those who have had to harbor trauma for so long – renewing my commitment to advocating for justice. Grateful to social media for the reach it can have. Disheartened that social media makes profit off of these stories through the ad revenues that are ever present in our feeds. Disheartened by the way social media has contributing to the subverting of our democracy. Disheartened by the reinforcement that fame and wealth equal greater opportunity for representative. There are still a lot of people unacknowledged and not benefitting from the #MeToo movement that should be.

When I decided to publish daughterrarium I was good with the implicit understanding that once copies were printed it would no longer be mine, but belong to those who read it. I’ve received reviews on Good Reads from one person who straight-up hated the book because she didn’t get it and another who also hated it and then “wishe(d) (me) all (her) best.” Code: No she doesn’t. I thought I’d be more hurt, but I wasn’t, and I was proud of myself for that. I even laughed, because whether these reviews are good, bad, or meh, I still really appreciate people taking the time to talk about my work. Holy shit, what a privilege this is that my poetry would be on the minds of strangers. But also, quantitative evaluations of poetry, of art, isn’t really the point. Poetry is the work of the heart, and our hearts beat to different drums.

What has been exceptionally crucial to me are the people I’ve met or who have reached out in various ways (like you Kristi, who emailed a congratulatory note on the publication of daughterrarium) to invite further opportunity to connect. I’ve been honored with the kindness and bravery of folks who have said that my work meant something to them, resonated with their own experiences, and then asked me for my opinion on their own writing. Whatever the reception the book gets, I’ve been able to contribute to the fortifying of other people’s work and lift up their stories, and that’s enough for me.

Kristi Carter is the author of Daughter Shaman Sings Blood Anthem (Porkbelly Press) and Cosmovore (Aqueduct Press). Her poems have appeared in publications including So to Speak, poemmemoirstory, CALYX, Hawaii Review, and Nimrod. Her work examines the intersection of gender and intergenerational trauma in 20th Century poetics. She holds a PhD from University of Nebraska Lincoln and an MFA from Oklahoma State University.
Sheila McMullin is author of daughterrarium, winner of the 2016 Cleveland State University Poetry Center First Book Prize chosen by Daniel Borzutzky. She co-edited the collections Humans of Ballou and The Day Tajon Got Shot from Shout Mouse Press. She is a community organizer working with youth to amplify their voices through storytelling and civic participation. She sat on the board of VIDA: Women in Literary Arts from 2015-2017. She holds an M.F.A. from George Mason University and volunteers at her local animal rescue. Find more about her writing, editing, and activism online at http://www.moonspitpoetry.com.