There are shoelaces without any shoes hanging from the telephone line outside my apartment while Judy pours another glass of wine. The laces are red and the wine is white. Nesto is ordering Chinese food on the phone and I ask for just an egg drop soup. The thought of lunch makes me feel vulnerable. Jay invites two girls from across the hall to join us even though Nesto does not care for them. He promises to be polite. Downstairs on the stoop Frankie and Vinny and José share a joint and talk about Tito Puente’s last live concert at Lincoln Center. Nothing has really changed since then. On the T.V. the newscaster is talking about the protest. My boyfriend turns it off, he says there are too many bodies. Frankie and Vinny and José smoke it to the end and talk about Tito Puente’s last live concert, which was actually in Puerto Rico. Nothing has been the same since then. Jay’s girls show up both wearing brown shoes. Being polite is brown. I get out ceramic plates while Judy pays the delivery boy. She smiles at him because she’s lonely. I let the soup trail down my throat its warmth running down me slow like a braid. I get used to this pace. Nesto strums a spoon on the edge of his dish. The music sounds nothing like guns. 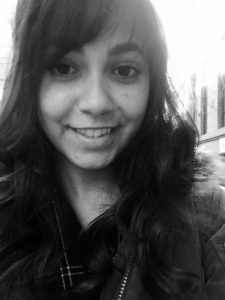 Gabrielle Otero was born and raised in the Bronx, NY. She recently received her MFA in Writing with a concentration in poetry and literary translation from Columbia University. Her poetry has appeared in you are here: the journal of creative geography. She currently works in television production and divides her time between the Bronx and Albany, NY.