Spanish for Rich Port. The island’s official nickname is La isla del encanto (English: The island of enchantment) and was described by the poet José Gautier Benítez as La perla de los mares (English: The pearl of the seas). In “La Borinqueña” Columbus declares Esta es la linda tierra que busco yo (English: This is the beautiful land I seek).1


When Spain ceded the island to the US, the name was anglicized to Porto Rico, kept the name for 33 years.5 Since 1952, the island’s official name is El Estado Libre Asociado de Puerto Rico (English: The Commonwealth of Puerto Rico6, lit. The Free Associated State of Puerto Rico).7

1The Spanish came for oro. / When the rivers’ gold gave way / to sangre / they stayed / for sugar. Stayed / for slaves. / Plundered the island / in the name of empire. / The British invaded / and failed. / The US finally destroyed Spain’s empire / in the name of their own.


2As always our fascination / with the native. / Our mythologizing. / The Noble Savage. / Kill the Taíno. /Say they put up / a good fight. / Hispanicize their names— / Borikén, Yuíza, Arasibo, Buinabo / : / Borinquen, Loíza, Arecibo, Guaynabo. / History books say the Taíno / were wiped out, / but even niggas who look like me / will claim the name. / Coño, even I’m guilty / of saying my father / has a Taíno nose.


3The same story. / The Bible and the Sword. / I hang a rosario / from my door / for protection. / Make the sign of the cross / for good luck. / Recite the Our Father, / Hail Mary, / and Glory Be / on loop during takeoff / and landing / for all flights. / I understand the irony.


4What’s a name / to a colonizer? / Columbus underestimated / the size of the globe. / Dubbed the Taínos / Indios. / Are you surprised / they couldn’t keep / the names straight? / Why even try when you’ve decided / the only names that matter / are the ones you give everything?


5Which is to say / you stuffed the English language / into our throats / in the hopes / we’d regurgitate it / back at you. / The island shat it out instead. / My English makes me a traitor / even if Spanish / is still a colonial tongue. / The language of resistance / depends on the colonizer.


6The name Commonwealth / does nothing to denote the island’s / colonial status. / Massachusetts is a Commonwealth. / Pennsylvania. Virginia. Kentucky. / Isn’t that the beauty of translation? / How you decipher / a name / less grotesque / than the direct rendering?


7What is Free about us? / Even our current name / is leftover / from the previous colonizer. / Associated is such a pretty way / to say colonized. / Cabrón, don’t even get me started / on State. / A white Lyft driver tells me / Puerto Rico should be the 51st / and I’m surprised at how well / I hold my tongue / drunk. / How I don’t tell her / if the island sunk / in el Caribe tomorrow, / this nation would plunge its fists / into the empty sea, / bare its palms / finally wash its hands of us. 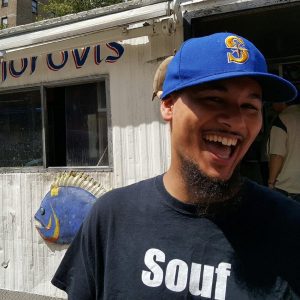 Malcolm Friend is a poet originally from the Rainier Beach neighborhood of Seattle, Washington. He received his BA from Vanderbilt University, and his MFA from the University of Pittsburgh. He is the author of the chapbook mxd kd mixtape (Glass Poetry, 2017) and the full length collection Our Bruises Kept Singing Purple (Inlandia Books, 2018), winner of the 2017 Hillary Gravendyk Prize