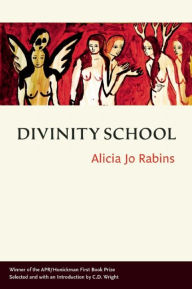 Alicia Jo Rabins is a Torah scholar and teacher, and Divinity School, which won the 2015 Honickman First Book Prize reflects the toil of the learned student, searching for meaning in the ancient stories, grappling through a tangle of questions centuries old. Rabins responds to the Bible by interpreting it anew, and, like the Talmud, answers questions with questions, asking about the nature of time, of loneliness, of the relationship between sexuality and spirituality. Taking many different voices—sometimes of teacher, sometimes of student, and often ambiguous—placed within and outside of biblical texts, Divinity School dances between preserving the past and recreating it.

There is a frozen waterfall
at a man’s center.
Your job is to kneel
below, to warm
his body, to draw
that slow fountain
into your mouth,
like a prophet
receiving God’s word. (1-9)

It is in this fashion that the collection provocatively questions ancient traditions. The poem “How to Sail” (perhaps alluding to the biblical rituals commanded to be undertaken by a woman accused of adultery) ambitiously questions the divine without inhibition: “Make a woman drink it: thus said Elohim. But why: thus said Molly” (2-3).

Divinity School is provocative in its questioning of the place of humans in the large scope of tradition, of memory, of the trajectory of time. The entire collection begins with this struggle in the poem “Blue Table of Sky”: “Was it bitterness? The bitterness of iron. Of being a link? Yes” (1-2). It is the bitterness of being a link with which many of these poems struggle, exploring the place of loneliness in a world of ancient tradition. “How ancient is the loneliness” (“Voxel” 1), writes Rabin. It is this delicate paradox that is woven into the collection: what is loneliness if it is shared by everyone? These poems speak of the loneliness of being a link—a link through time, of passing on a tradition, of being both student and teacher, standing between the past and the future.

There is a sense of submission to the inevitability of time’s passing: “Too late, God,/ for both of us. Waste and wild, too late” (“Too Late” 22-23). Yet if throughout the collection time seems to be linear, by its end it is circular. “Flood,” the last poem of the collection, describes the inscriptions of a cuneiform in a locked basement:

This collection is one of reimagining ancient stories, studying them and bringing them to life again. “The Story of Jonah” recreates the biblical story in an office building of a modern businesswoman. In “How to Sail,” the speaker travels through time by studying the ancient texts: “We were sailing on a wind that passed through the open window of a room next to the marketplace, two thousand years ago” (5-7).

And thus, the collection continuously asks: is there anything that is immortal? This question is answered, as in the Talmud, with a question: “‘why can’t the poem be the fish?’/ ‘Because the fish will die’” (“Mermaid” 8-9). A poem is poetry because it cannot die. It is the poem that is immortal. The text, like on the cuneiform inscription, survives.

In this sense, Rabins’s collection, Divinity School, can be learned like the Bible itself, explored and reexplored, internalized and reimagined. The reader is challenged to place him/herself inside the text as a link—moving, like the poems themselves, in and out of the fluidity and inevitability of time.

Yael Herzog is a writer from Tel Aviv, Israel and MFA candidate at Bar Ilan University. She is a painter, sculptor, and cheese enthusiast. Her work has been published in the Jofa Journal and the Jewish Link among other publications.