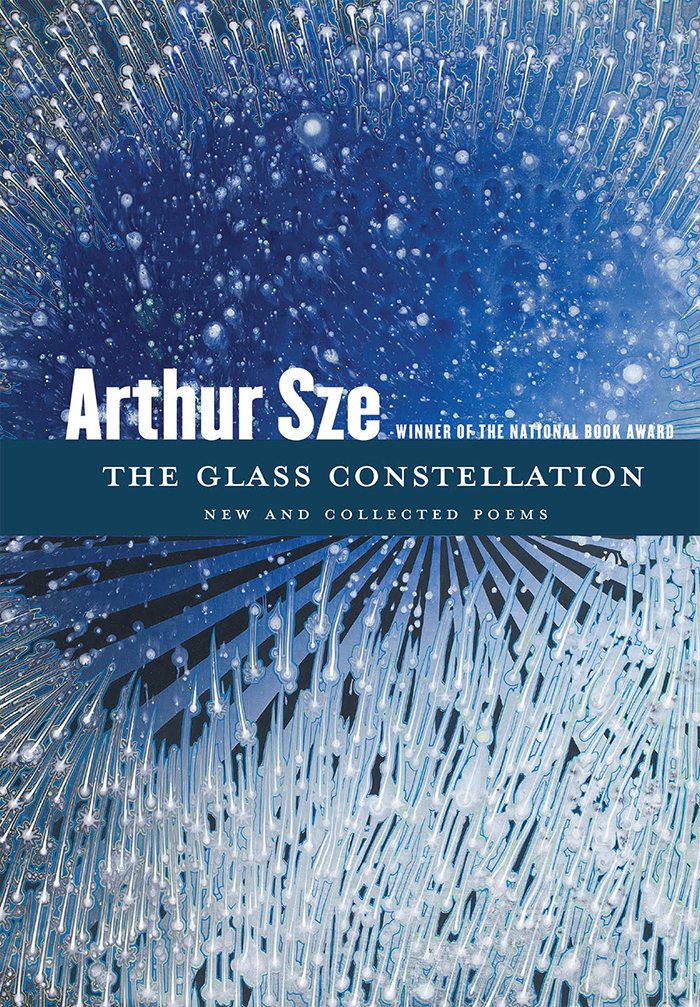 The Glass Constellation by Arthur Sze

The Glass Constellation celebrates Arthur Sze’s poetry over the past five decades. In addition to ten previously released collections, this compilation includes a new collection titled The White Orchard with twenty-six poems. Poet Dana Levin as quoted by Poetry Foundation describes a “Deep Noticing” in Sze’s works that has a strong lineage in American poetry, one that is shared by William Carlos Williams. Indeed, the form deeply expresses Sze’s love for poetry so much so that the images effuse like the “articulated emotions like the edges of leaves” in the final poem (“Transpirations”). As poet Jackson Mac Low as quoted by Poets.org says, “Author Sze is truly a poet of clarity and compassion.”

Sze’s language is immersive and not just in meaning. It is a result of the poet’s love given in time and dedication. In an interview with The Kenyon Review around the time the Compass Rose collection was released, Sze says:

My writing process is much slower than when I first started out. I find it’s better to not know too soon where a poem might be going, and, as I extend and deepen that process of uncertainty, I find that I often discover images and phrases that are like seeds. As the poem gestates, I try not to rush it but to explore and deepen the process. [He also recommended not going without writing for six months or a year as an experiment.]

The landscapes such as New Mexico, which Sze writes about in poems like “Acequia del Llano,” become the blank canvas. Then words and time work their way into images, deepening connectedness between the place and the poet’s process, bearing witness to the poet’s presence. Here are several lines from the poem “Circumference”:

It is hard to believe farmers pollinate vanilla orchids

yet we do as needed; pouring syrup on a pancake, I catch the scent of vines,

race along the circumference, sensing what it’s like to sit

in the dark with nothing in my hands.

The relationship between “vanilla orchids” and “toothpick” makes sense in light of the food words “syrup” and “pancake”  and as bridged by the lines “yet we do as needed”—meaning the vanilla orchids are needed for enjoyment of the pancakes. Then “scent” with “sensing” into “nothing” conveys the gravity and gratitude for this reflection through another reflection on absences. The final lines tie back to earlier lines, “How do you trace a sphere / whose center is nowhere?”. These lines echo each other and the idea of an embodying presence just by being present, a recurring idea in Sze’s poetry. As the reader reaches out in contemplation, the poems reach back as a loving being would through an expanding sense of depth.

But this presence isn’t simply about wanting to be known. Instead, it evokes a collective understanding, and perhaps the most telling way this happens is through the alternation of the first person, second person, and first-person collective within poems. The presence celebrates and effuses over someone with a shared understanding, such as a lover. The closeness is palpable in lines like “Now we are X, collapsing space, collapsing time” from “Entanglement”. The metaphor of an implosion suggests that the vacuous moments of emptiness are opportunities for hidden meaning to be found. The reader’s understanding and poetry’s embedded meaning need patience to be truly discovered. More than just things framed by imagist language, the poetry is emotion, process, seeing, and experiencing. It celebrates the joint journeys of the reader and poetry into wholeness. Time and attention are the keys to unlocking this.

Actually, “Rock Paper Scissors” makes particular sense in light of this discussion. The lines “you look at a series of incidentals / and pull an invisible thread through them all” represent a sudden and deep realization followed by the need to retrace how that happened. The source of this inclination, as suggested by the images of the “chrysoprase heart in a box” that “you / go wrapping,” is love. The impetus implied is the deep love Sze has for poetry that awaits reception. The many sunrises written in but probably going unnoticed the first time are not worthless, but opportunities for revisitation. The reader seeks out the love embedded as a way to offer their love of poetry. In the reciprocation of this love is the discovery of what is worthwhile.

“The White Orchard” is one of Sze’s more experimental poems, taking the idea of presence behind the images to literal heights with the line, “branches bending under the snow of this white page.” The direct referring to the pages of poetry themselves suggests the white orchard could be metaphorical—the very pages themselves. It is as if to say the pages bear meaning of the poetry so moving that they take on a life of their own, flowing through or rather “collapsing” into other images, obliging the writing process even. In turn, this urges the reader to connect, to feel along with this very process, to finally “expand” the threads of meaning through discovery. It feels like the poetry has come a long way since William Carlos William’s simple maxim, “No ideas but in things.” The reading of Sze’s The White Orchard can feel like breathing and breathing easily because of a lover’s love.

Bio:Ian Koh is completing an MFA in Creative Writing at Chapman University. He is a writer from Singapore who has been living in the US for several years for studies. His poetry has appeared in Forth Magazine and Inkslinger.