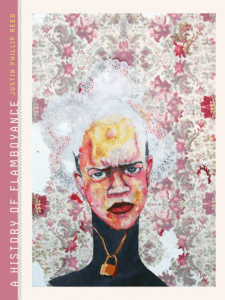 A History of Flamboyance by Justin Phillip Reed

Confession is a selfish act from a selfless place, the idea that the path of the world’s betterment is nothing if it doesn’t travel through the places where we share our horrors with anyone who will listen. There’s no room for the banal or nice—confession itself implies the presence of the terrible and wrong, as nobody has ever confessed to buying someone ice cream or getting their car washed.

Justin Phillip Reed’s poetry chapbook, A History of Flamboyance, both dissects and subverts the confession, pointing his words at horror itself and figuring out what is terrible, what is wrong. This is a book about identity and both sets of eyes that view it: his and ours. It’s fact through feeling—or maybe the other way around—as Reed makes clear the danger and fear of being black or gay or southern or screaming or hurt or alone.

The subtext, of course, is how much worse it would all be to never come to those terms himself. Much like confession dissipates the unbecoming feelings as they transfer from us to others, “identity” has those two sides of acceptance, internal comfort operating in external circumstances.

These poems are a repurposing of a life in unrest. Confessional, sure, but above all else, A History of Flamboyance is where the work of survival beats its chest with a cock in one hand and the keys to the pearly gates in the other.

the way a fist

that wishes it were a heart

wants to be the only tattoo

on my left chest:

on skin as a nipple

nodding through a shirt.

in dreams my fist is just

as the naked neck

of a dead hen. i hit

nose and jaw and hurt

mostly myself. i’m not

what has long passed

for a Carolina man.

Owning anything is a solo trip. For Reed, everything gets owned. There isn’t a journey in the epic sense of miles travelled either physically or emotionally, but there is an intense navigation that bursts out in several directions. This is a bit more delightful subversion, as our protagonist thread is more a non-hero than an anti-hero.

It’s not one clue in many rooms—it’s one room with every clue. Organization of self. A duplicity into a oneness.

I felt lost when these poems drifted away from their scenic roots, and I got little from the more language- and form-oriented poems. They serve their purpose in the overarching tone of the book—the repetitive, short-lined template poem for moments of self-spiraling, the bracketed, shape-shifting poem for the maelstrom of voices bubbling up, etc.—but Reed does that narrative, stanza-shaped poetry so well that it’s how I wanted all of his work delivered.

Reed’s poem “Borderline” is a near perfect standout piece, a stationary looker feeling his way through time spent at a mental hospital.

the memory’s not vague. blueberry yogurt:

dish of the day every day. the meal planners

as if a promise ring, and then promises

chased themselves. the spin cycle resembled

more wiry and rubber-made than when

he rolled out that morning. maybe now

he is dead, or has kids, or is in jail and has kids

he did not kill while hallucinating knifemen.

On the whole, Reed is vulnerable throughout. When he ends the opening poem with “I stomped upstairs cussing your name. I flung / faith to the sun’s far side / and settled for you as an idea / like God / or electricity. / I never knew anything could be worshipped in this way.” it makes the opening’s clouded infidelity the stuff of universal understanding. Sincerity and awareness are passing out their numbers at the bar.

The towns in the Midwest I grew up in were a fraction of a percent non-white, and I didn’t have a chance to talk to a black person until college. Same for queerness, as nobody I knew growing up came out until adulthood.

For better or worse, “Borderline” appeals to me because it both contains themes in the wheelhouse of the book—mental health, redemption, observation—and most resembles my life. It’s where I see the most of myself, and it makes me thankful there’s the rest of the book, a not-white, not-straight place where others can find their lives lived with grace and honesty.

These poems exist because of the gay, black, south of Reed’s experience. The tension of those cultures rubbing against oppression, acceptance, and understanding make A History of Flamboyance a powerful work. Justin Phillip Reed is a voice worth hearing, the world a bigger and better place because of it.

Ryan Werner is a cook at a preschool in the Midwest. He plays an old Ampeg VT-22 in a loud, instrumental rock band called Young Indian. He's online at RyanWernerWritesStuff.com and @YeahWerner on Instagram.