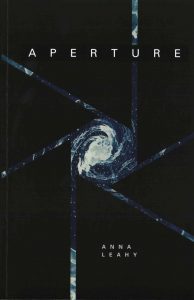 Aperture by Anna Leahy aims to refocus the lens of history on “virgins and harlots” and demands that these women be seen.  Five tightly structured sections and a coda shine a spotlight on the lives of women as diverse as the mothers left behind in the Wizard of Oz, Mary Todd Lincoln, Lizzie Siddal (photographer’s model), and Katherine Johnson (NASA mathematician).

In the first section, The Absent Mothers of the Wizard of Oz Speak Out, Leahy uses a variety of forms for each mother to tell the story of her missing child: interviews, letters, press statements, a sonnet, and even graffiti. In “Mrs. Gale’s Posthumous Television Interview”  (9), Dorothy’s mother fills in the missing details of Dorothy’s childhood. Mrs. Gale died shortly after childbirth; Dorothy’s father remarried and started a new family. When asked “What do you think has become of your daughter?” her answer subverts Dorothy’s desire to return home to Kansas:

I hope she is traveling. That’s something I was never able

to do. I see no good reason why she should ever return

“After Assassination” is a seamlessly executed crown of sonnets in which Mary Todd Lincoln describes grief, “migraines and melancholy,” (14) and her struggle to resume managing her “own affairs.” (15) A well-placed epigraph from Joan Didion reminds the reader that the tragedy the nation suffered was highly personal for the widowed Mrs. Lincoln whose physical and emotional pain is recorded so intimately it almost feels like a violation of her privacy to read these poems.

The poems in the section titled “Lizzie Siddal Looks Back on Posing” tell the story of  Siddal,  a model best known for posing as Ophelia. Also a painter herself, Siddal asserts her agency as an artist in “On Sketching Pippa Passing the Loose Women (1855)”: (22) “I rendered the human form well, too.”  and continues to parse the word “render”:

“to create a version

to give something in return

Rend: to slit, to split apart.”

Leahy dazzles the reader with wordplay that explores how we construct meaning when words mean more than one thing and demonstrates how multiple narratives exist simultaneously. “Laudanum” comments on Siddal’s death and the fine line between accidental overdose and suicide: (23)

and drop: let go of, release.

her hands so full of herself

chiming this is all you have.

And the next, a man’s hands caress

each swollen areola. You are whole, Agatha.

The “Awash” section is unified by form and subject matter. Each poem is structured in indented tercets.  Mermaids, Marie Curie, and a lighthouse keeper come together in these poems. “The Waves” (70) speaks not only for Virginia Woolf who longs “to make sense of herself,” but for all the women gathered here. “My Mother’s Mermaid” (71) connects the narrator’s mother to Esther Williams, (competitive swimmer and actress) a modern Aphrodite, who rises:

as if passion were technicolor myth,

as if the sea were the means

for the story I tell

instead of the story itself,

the thing that tells me.

Deborah Hauser is the author of Ennui: From the Diagnostic and Statistical Field Guide of Feminine Disorders (Finishing Line Press, 2011). Her work has recently appeared in Bellevue Literary Review, TAB: The Journal of Poetry & Poetics, and Carve Magazine. She has taught at Stony Brook University and Suffolk County Community College. She leads a double life on Long Island where she works in the insurance industry.